Rowling heavily promoting her The Casual Vacancy – but will it cast a spell on adult readers? 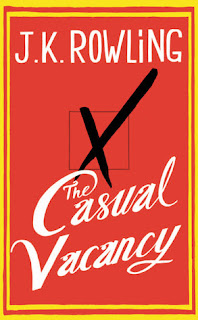 According to her interview with the Guardian, she dreamed up the idea for on a plane: "And I thought: local election! And I just knew. I had that totally physical response you get to an idea that you know will work. It's a rush of adrenaline, it's chemical. I had it with Harry Potter and I had it with this. So that's how I know."

The Casual Vacancy is set in a fictional town of Pagford, written from multiple perspectives. It is supposed to be "a story of class warfare set amid semi-rural poverty, heroin addiction, and teen-age perplexity and sexuality."

In writer Ian Parker's assessment, "within a few pages, it was clear that the novel had not been written for children.... But reviewers looking for echoes of the Harry Potter series will find them. The novel describes young people coming of age in a place divided by warring factions, and the deceased council member, Barry Fairbrother (who dies in the first chapter but remains the story’s moral center) had the same virtues, in his world, that Harry had in his: tolerance, constancy, a willingness to act."

From a marketing and legal standpoint, the terms of the embargo have become part of the story. The Guardian reporter described being "required to sign more legal documents than would typically be involved in buying a house before I am allowed to read it, under tight security in the London offices of Little Brown. Even the publishers have been forbidden to read it, and they relinquish the manuscript gingerly, reverently, as though handling a priceless Ming vase."

Good legal practice, but silly marketing? You are the judge!
Will Rowling be able to cast her spell on adult audiences? I have my doubts...Let’s wait and see!
Posted by Debra Daumier at 12:10 PM