The Astérix-phenomenon – how a little Gaul conquered the world 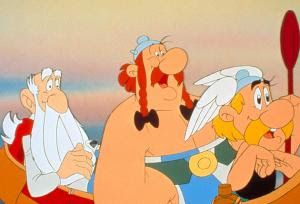 The US has Mickey, but the French gave the world Astérix. Fifty years ago, René Goscinny wrote and Albert Uderzo illustrated the first Astérix story for the magazine Pilote.

Half a century later, our favorite Gaul is still going strong. On 22 October, the 34th strip album in the series came out to celebrate: "Asterix and Obelix's birthday - The Gold Book".

You have to understand that comics are perceived differently in Europe than in the US. Especially the French and the Belgians take their Bandes Dessinées (BD, “drawn strips” or comic strip books) very serious indeed, and Astérix is part of this cultural heritage. In the last 50 years, 325 million Astérix strip albums have been sold in 107 languages.

What made our little Gaul such a success? It is based on the concept that modern-day France sees itself as beleaguered by the imperial forces of the US. So what better way to address this angst than by having a cunning little Gaul routinely and successfully outwitting and beating the cloddish forces of Caesar’s Rome?

Each comic book starts with “The year is 50 BCE and Gaul is entirely occupied by the Romans. Well, not entirely. One small village of indomitable Gauls still holds out against the invaders.”
It makes anyone who had to read Julius Caesar’s “de bello Gallico” (in Latin, mind you!) in high school chuckle…. The stories poke gentle fun at other countries, including the UK, Belgium, Spain, Greece and Switzerland - to name just a few.

The original French text has wonderful name puns for the various Gaulish and Roman characters, usually ending in "ix" for the Gauls or "us" or "a". It was quite a struggle for translators to make sure the humor was not lost in translation. The chief Druid, who mixes the magic potion, is "Panoramix" in French, "Getafix" in the UK and "Readymix" or "Magicmix" in the US (localization is in overdrive here!). The village chief is "Abraracoucix" in French, "Vitalstastix" in the UK, and "Macroeconomix" in the US. The fishmonger's wife is "Ielosubmarine" (Yellow Submarine) in French and "Bacteria" in the UK and the US.

Astérix is a short, cocky, clever, and hyper-energetic Gallic leader. Sound familiar? No, he doesn’t have a tall, glamorous wife of Roman origin. But Astérix has become part of current French politics. François Fillon, the French Prime Minister, is a sworn enemy of Xavier Bertrand, the Minister of Labor. Fillon accuses Bertrand of bearing malicious tales to President Nicolas Sarkozy, and thus refers to him (in private) as "Tullius Detritus". (Tullius Detritus is a Roman agent, who can divide the best of friends and families with a couple of ill-chosen words).

You have to understand that Astérix was created in the time that Charles de Gaulle was the French president. He saw the world as La France vs. the Rest of the World. The idea of the Asterix creators was to gently mock this French insularity.

In a delicious twist of fate, Astérix became as much a global brand as Mickey did. Up till now, our village-dwelling, Roman-bashing Gaul is the only serious competitor of America’s favorite rodent, including his own theme park outside of Paris.

Even more ironic is the fact that these ultra-French characters were created by children of immigrants: Uderzo's parents were Italian and Goscinny, who passed away in 1977, came from a Polish-Jewish family.

Little Astérix, his faithful pal Obélix and their posse of friends were cooked up during a 30-minute brain-storming session in a council flat in Paris. Who would have known that they would conquer the world by resisting the Romans?

It looks like we will enjoy our Gauls for many years to come. Mr Uderzo sold rights to the series to the publishing conglomerate Hachette, and he has appointed three young artists to take over when he dies.

Astérix also gave birth to a wonderful urban myth. On April 1st 1993, the UK newspaper “The Independent” claimed that French and British archaeologists had unearthed the remains of Asterix's "indomitable" village on a headland near Lannion in northern Brittany. The excavations at Le Yaudet had uncovered coins marked with images of wild boar, the favorite food of Obélix. Although the newspaper later reported that it was an April Fool's joke, an urban legend was born. In 1999, the Collège de France, the country's most prestigious academic institution, asked the French archaeologist Patrick Galliou to give a talk on the dig – much to his amusement. He was mentioned in the spoof article as one of the archaeologists.

For the numerous fans all over the world (myself included) - happy L Astérix!
Posted by Debra Daumier at 7:10 AM No comments: