Humor as a weapon of mass exposure – the Borat success story 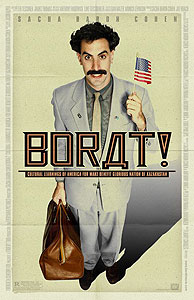 Sacha Baron Cohen is a brilliant Cambridge University-educated British comedian who is able to amuse most of us while irritating an entire nation.
You see, Cohen’s alter ego is Borat Sagdiyev, a television news reporter making a meager living in the struggling country of Kazakhstan.

In his brilliant parodies, “Borat” tells the world about his beautiful home country of Kazakhstan (a urine-drinking, Jew-hating, inbred society).
He is wonderfully political incorrect and gets away with it.
In the process, he exposes the hypocrisy of many.
No subject is safe - sexual orientation, religion, culture....it's all fair game.

In one skit, Cohen pokes fun at conspiracy theories by stating as Borat that “when in America he travels by car just in case the Jews repeat their attack of 9/11.”

To satirize homophobia, Borat asked an anthropologist: "Are you a homo sapiens? Because it doesn't matter if you are."

At a feminist gathering, Borat was political incorrect and misogynic by "innocently" extolling the virtues of Baywatch.

The branding of the Borat character is brilliant – just check out the Borat website and notice the misspelling, MySpace mentioning, and photo album.

Needless to say, the people of Kazakhstan were not amused.
The tourist department even shut down Cohen's borat.kz website.
(It was immediately redirected to www.borat.tv)

To boost their national image, the Kazakh government took out a pricey four-page full-color ad in the New York Times and the International Herald Tribune today.
The special four-page insert entitled "Kazakhstan in the 21st Century" features a photo of the country's president Nursultan Nazarbayev on its front page shaking hands with President George W. Bush.
This piece of crisis management didn’t come cheaply – such ads are around $300,000 - $400,000 - Kazakhstan's per capita income was approximately $8,000….

Unfortunately for the poor Kazakhs, Barat beat them to it.
His movie “Borat: Cultural Learnings of America for Make Benefit Glorious Nation of Kazakhstan” hit the theaters in November 2006 and already won raves from critics and fans alike.
The movie tells the story of our favorite Kazakh reporter, traveling from his dirt-poor, Kazakh village of Kuzcek (“3 mile north of fence to Jewtown”) to New York on behalf of the Ministry of Tourism.
He must observe the western way of life and report back with any information that could benefit his native land.
The plan is to stick with the culture of New York, but soon after Borat learns to use the television remote control he is compelled to take his journey to the west coast.
Seduced by "Baywatch" and learning of his Kazakh wife's death (via telegram) in a very short span, Borat makes his new mission to woo and marry buxom Hollywood starlet Pamela Anderson.

In the movie, Borat attacks many groups and subcultures as a bumbling foreigner and gains the trust of his interviewees.
Through his native questions, he cleverly coaxes brutally honest responses out of his interviewees, who are only too happy to tell him what they really think.
It’s not a pretty picture – one old rodeo guy would like “us to take care of gays here as they do in Muslim countries”.
It also shows how the Western ideal of freedom of speech can cause a global controversy.

Staying non-stop in character, Cohen wowed the crowds at the London premiere of his movie by stating:
"I have come here with Bilak, my 11 year old son, his wife and their child, and we are hoping maybe to put some chocolate make-up on the child's face and sell him to Madonna.
I am hoping that Madonna will be a very good father for it."

Cohen also unwittingly exposed the BBC as biased towards religion and politics.
In an exercise to check the attitude of its executive staff, the BBC presented its executives with the following scenario.
Suppose Sasha Baron Cohen participates in a BBC program studio program titled ‘Room 101’, where guests are asked for their opinions on different issues, and are allowed to symbolically throw things they hated in a garbage bin.
What would you, as our BBC executive do if Cohen decided to throw ‘Kosher food’, the Archbishop of Canterbury, the Bible, and the Koran in the garbage bin?

Not surprisingly, the BBC executives said they would allow everything to be thrown in the garbage bin, save the Koran, for "fear of offending the British Muslim community."
Enough said….
Posted by Debra Daumier at 3:52 AM No comments: