About vooks, digi-novels and hybrid books 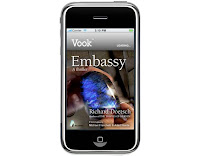 You must have heard of it - the vook is here. A vook (video + book), also known as a digi-novel, combines videos with electronic text that can be read/viewed online or on an iPhone or iPod Touch. Simon & Schuster was the first publisher to for it with the release of four vooks.

Early September 2009, Anthony E. Zuiker (creator of the television series “CSI”) put the vook firmly on the map with his "Level 26: Dark Origins”. The novel is published on paper, as an e-book and in an audio version. Readers are invited to log on to a Web site to watch brief videos that flesh out the plot.
Brian Tart, publisher of Dutton, an imprint of Penguin Group USA, which released “Level 26,” said he wanted the book’s text to be able to stand on its own, but the culture demanded rethinking the format.
“Like everybody, you see people watching these three-minute YouTube videos and using social networks,” Mr. Tart said. “And there is an opportunity here to bring in more people who might have thought they were into the new media world.” Readers of “Level 26,” which Mr. Zuiker wrote with Duane Swierczynski, have mixed responses to what the publisher is marketing as a “digi-novel.”
“It really makes a story more real if you know what the characters look like,” commented Fred L. Gronvall in a review on Amazon.com. The videos, he wrote, “add to the experience in a big way.”
But another reviewer, posting as Rj Granados, wrote, “Do you really think cheesy video vignettes will IMPROVE the book?”

“Everybody is trying to think about how books and information will best be put together in the 21st century,” said Judith Curr, publisher of Atria Books, the Simon & Schuster imprint that is releasing the electronic editions in partnership with Vook, a multimedia company. She added, “You can’t just be linear anymore with your text.”

Another vook is “Embassy,” a short thriller about a kidnapping written by Richard Doetsch. It uses a video snippet that resembles a newscast reveals that the victim is the mayor’s daughter, replacing some of Mr. Doetsch’s original text. He said that the new editions should not replace the traditional book. He has written a forthcoming novel, “The 13th Hour,” that he thinks is too long to lend itself to the video-enhanced format. The new editions, he said, are “like dipping a novel into a cinematic pool and pulling it out and getting the best parts of each.”

Jude Deveraux, a popular romance author who has written 36 straightforward text novels, said she loved experimenting with “Promises,” an exclusive vook set on a 19th-century South Carolina plantation in which the integrated videos add snippets of dialogue and atmosphere. But the use of video clips to provide atmosphere, including fluttering shots of cernuous willows and Southern mansions don’t work so well. The text was produced separately from the videos, which makes the clips feel not only redundant, but distracting as well.

Not all authors are charmed by the idea. Some authors resent the idea of mixing mediums. Walter Mosley stated: “As a novelist I would never ever allow videos to substitute for prose. Reading is one of the few experiences we have outside of relationships in which our cognitive abilities grow, and our cognitive abilities actually go backwards when we’re watching television or doing stuff on computers.”

Personally, I like to snuggle to with an old-fashioned printed book. I love the smell and the sensation of turning pages. For me, video images would distract me - I like to use my own imagination to "picture" the story and its characters. I do see a future for vooks of the classics, such as "Ab Urbe Condita" and "La Chanson de Roland". Funny enough, I didn't see marketeers in the high-tech sector jump on it yet. A vook would be a great format for technical brochures and white papers and an amazing marketing tool.
Posted by Debra Daumier at 10:55 PM 1 comment: 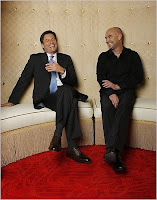 After reading the first chapter of “Open”, Agassi’s autobiography, I was amazed by the use of language. J.R. Moehringer paints a vivid picture of the painful memories of young Andre, using powerful prose. (The complementary first chapter can be found on BookArmy). For those of you not familiar with Moehriner, he is a Pulitzer Prize winner and wrote for the New York Times and Financial Times. He also wrote his own memoir “The Tender Bar” about his fatherless childhood that caught the eye of Agassi.

They started collaborating and taped 250 hours of sessions- a number any psychoanalyst would be jealous of. Moehringer was able to get inside Agassi’s head – not an easy thing to do. He read Freud, Jung and mythology to better understand the former tennis champ. Finding the right voice for telling the compelling story posed a challenge. Moehringer decided use the opposite of Bertrand Russell’s style and go for a stream of sentences in the present tense without any use of quotation marks.
The result is nothing short of stunning. To quote Janet Maslin of the New York Times: “The ease with which Mr. Moehringer slips into telling someone else’s story is both compelling and spooky”. I wholeheartedly agree – just read the first chapter.

You might wonder why Mr. Moehringer is not mentioned on the cover or on the title page. Before you draw wrong conclusions – it was Mr Moehringer’s own choice. To quote him: “The midwife doesn’t go home with the baby”.

That may be so, but Mr. Moehringer deserves accolades for giving Agassi such a powerful voice.

(Image courtesy of the New York Times)
Posted by Debra Daumier at 9:51 AM No comments: 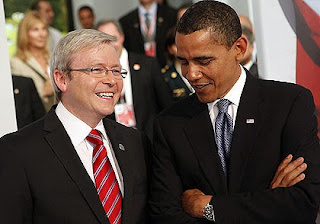 Australians are known for their plain speaking, and their Prime Minister Kevin Rudd is no exception. Even post 9/11, many politicians are still bending backwards to be PC. Not so in the largest democracy Down Under.

Just look at the speech of Australia's PM below:

"IMMIGRANTS, NOT AUSTRALIANS, MUST ADAPT.

Take It Or Leave It. I am tired of this nation worrying about whether we are offending some individual or their culture. Since the terrorist attacks on Bali, we have experienced a surge in patriotism by the majority of Australians.

This culture has been developed over two centuries of struggles, trials and victories by millions of men and women who have sought freedom.

We speak mainly ENGLISH, not Spanish, Lebanese, Arabic, Chinese, Japanese,Russian, or any other language. Therefore, if you wish to become part of our society . Learn the language!

Most Australians believe in God. This is not some Christian, right wing, political push, but a fact, because Christian men and women, on Christian principles, founded this nation, and this is clearly documented. It is certainly appropriate to display it on the walls of our schools. If God offends you, then I suggest you consider another part of the world as your new home, because God is part of our culture.

We will accept your beliefs, and will not question why. All we ask is that you accept ours, and live in harmony and peaceful enjoyment with us.

This is OUR COUNTRY, OUR LAND, and OUR LIFESTYLE, and we will allow you every opportunity to enjoy all this. But once you are done complaining, whining, and griping about Our Flag, Our Pledge, Our Christian beliefs, or Our Way of Life, I highly encourage you take advantage of one other great Australian freedom, 'THE RIGHT TO LEAVE'. If you aren't happy here then LEAVE. We didn't force you to come here. You asked to be here. So accept the country YOU accepted."

Whether you agree with his sentiments or not - isn't it just great to live in a part of the world where you are able to express your opinions and for others comment on it without the fear of prosecution (or worse)?
Posted by Debra Daumier at 12:42 AM No comments:

The fine line between reality and fiction becomes increasingly blurred. It's harder and harder to find out what is real, or what is staged for the tube viewers.

Striking examples include the infamous Balloon Boy, remember? Aptly named Falcon, the Heene boy was reported to be soared off in a balloon. The caper kept half of the globe glued to the TV screen, hoping that the boy would return safely to his (as it turned out) dysfunctional family. After a spellbinding moment when the landed balloon was empty of any life form (human or otherwise), Falcon turned up in the attic of his home. Proving the old movie adage "never work with kids and animals", he let slip during an CNN interview "you said we did it for the show". Turned out that his parents (who appeared on the reality show "Wife Swap") used the hoax to score their own reality show.

Then we were entertained by the "Tariq and Nichaele Salahi" -soap opera, remember, the couple who crashed Prez. Obama's first state dinner (and boasted about it on Facebook). The couple auditioned for Bravo's upcoming " the real housewives of DC" - but are reportedly not selected. They might get their day in court so to speak - they have been subpoenaed by the House Homeland Security Committee. Let's hope for them that Court TV will broadcast it.

And now we are mesmerized with the Tiger Wood-sage, that is brought to us via a slew of media 24/7. He was able to knock the Climate Summit in Copenhagen off the headlines. Who cares about global warming and depleted resources when you can gobble up info on Tiger's growing number of bimbos? It's the stuff reality shows and soap operas are made of - drama, illicit love trysts, medical emergencies, and large sums of money changing hands......

While children are being chastised (and pushed into therapy) for having an invisible friend, their parents are glued to their TV screen to find out more about scandals in real-time. The rest of the household, especially their teenage daughters, go on dreaming about vampires and werewolves.

It makes you wonder if your own little life is real or fiction...
Posted by Debra Daumier at 10:06 AM 2 comments: