Yep, it was that time of year again…the Eurovision Song Contest brought to you live from Vienna.

Let’s have a look at how the 27 candidates did.

1. Slovenia
A strange woman in wedding dress wearing a huge headphone (think 1980s) sang about something or other while a ballerina in a glitter outfit did her own thing. Enough said.

2. France
Being French, the singer was dressed in black (think Edith Piaf) and sang in her native tongue - naturellement! Against a background of white doves on steroids, a bunch of drummers joined the fun.

3. Israel
This chubby Justin Timberlake wannabe looked like one of the few performers who was having fun. No Tortured Soul here! The catchy dance number will be a summer hit - mark my words.

4. Estonia
Another Tortured Soul (see France for the first one) showing a lot of cleavage and being leered at by a fellow singer. Creepy…

5. UK
A duo sang a sort of 1920s number surrounded by dancers and lots of special effects. Who has been binge watching Dr. Who?

6. Armenia
The piano was able to drown out the singers. There were also lots of church bells ringing - a tribute to North West’s baptism in the Armenian Quarter of Jerusalem?

7. Lithuania
Two singing soap stars with two soap star background singers. Lot of owa, owa, owas. Looked like a scene from the Young and the Rest of Us

8. Serbia
An Opera Diva performed with a mask wearing, flag-waving entourage. A left over from the May 1st parade? 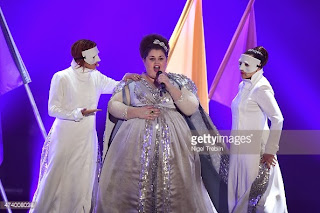 10. Sweden
Guy wearing leather pants singing in the digital rain. Multiple stick figures from the For Dummies series moved (danced?) in the background. Singer kept repeating “heroes of our time”, which made it as exciting as Ikea furniture. (Sadly enough, the Boring Swede won)

11. Cyprus
Strumming an acoustic guitar, I got Eric Clapton vibes watching it. At least the singer can play instead of playback. 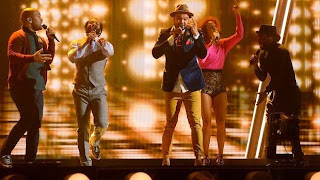 13. Belgium
This time, a Justin Bieber wannabe hit the podium. His four background singers in white looked like extras from a SF show.

14. Austria
Another wannabe; this time Kid Rock. I rest my case.

15. Greece
Guess what? Yep, another wannabe! Channeling Celine Dion, the nicest thing I can say about this singer that I loved her earrings.

16. Montenegro
This singer was one of the few singing in his native tongue - kudos! The melody was catchy and the four muses behind him looked good.

17. Germany
Catwoman represented the Teutonic State, singing “Too Hot”. Note to singer: “No, you are not!” 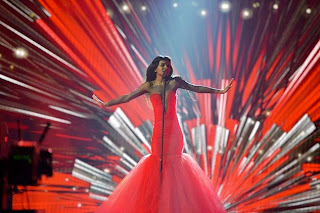 20. Romania
This baldie was also singing in his native tongue. Catchy melody, but no idea what it was about.

21. Spain
This time, a Jennifer Lopez wannabe. Singing is Spanish, she also performed a nifty dance number with a hunky guy. Gracias!

22. Hungary
A quintet of classy singers with good voices. The cameraman had a thing for the singer in the red dress.

23. Georgia
Goth Girl looked like she belonged at a KISS concert. She sang about something or other; could be anything from love to ousting Putin. 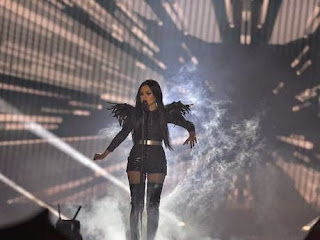 24. Azerbaijan
Yep, another Tortured Soul! But the two dancers were amazing and obviously trained in classical ballet.

25. Russia
A skinny Anna Nicole Smith lookalike dressed in white (what else?) belted out a nice song. I rooted for her to win, but she ended in second place. Pity!

26. Albania
This poor singer was completely overpowered by the background music. Lots of ayeh, ayeh, ayehs...Boring!

27. Italy
Italy sent 3 Divos singing about amore (what else). Singing and styled like the highly successful Il Divo, I liked it. 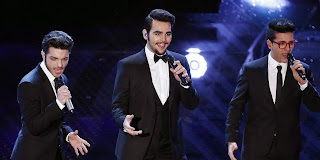 Next year, it will be Sweden again to host the event. Good luck with that!
Posted by Debra Daumier at 1:49 PM No comments: