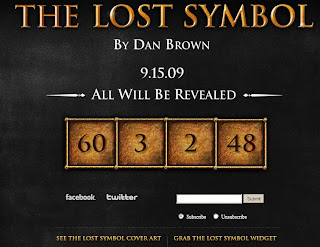 Dan Brown’s latest novel will come off the presses coming September. This new novel, The Lost Symbol, was previously titled The Solomon Key. I am not sure, but I think he changed it due to a slew of books already out in print with a similar title (and questionable content). The plot seems to evolve around a Conspiracy (what else?) and this time it’s the Freemasons that are involved. I wonder how that will go down, especially in the US.

Just in case you wonder about the origin of Solomon’s key (yes, I know, you have better things to do with your life, but why not ?) - here’s what it originally was all about. According to Biblical tradition, Solomon held the key to interpreting the language of animals and plants. (Not sure it this is really helpful for ruling a country, but that’s just me. I am glad I don’t understand what my cat is shouting at me; I have enough trouble figuring out what the heck my fellow human beings are talking about). The basis is a verse in Kings 1:”And [Solomon] spake of trees, from the cedar tree that is in Lebanon even unto the hyssop that springeth out of the wall: he spake also of beasts, and of fowl, and of creeping things, and of fishes.” (Not my translation, so if a scholar feels it lacking, please put an update in the comments section of this blog. I will be more than happy to incorporate that version).

In all fairness, I am not a great fan of D. Brown. I don’t subscribe to conspiracy theories, and found a lot of research in his novels sadly lacking in scientific content. I am also not in favor of upsetting millions of Christians, especially Catholics (I grew up with very nice Catholic friends, so I have warm memories, although I am of a different faith). PR wise, the Catholic Church did more to promote the Da Vinci Code by being all huffy and puffy about it, than any PR company ever could. I wonder - will if this happen again this time around with the Freemasons?

Doubleday, the publisher behind the forthcoming follow-up, is conducting a promotional campaign comprising a series of puzzles on social networking sites, including Facebook.
The first print will have 5 million copies – for sure they will fly off the shelves. The future for The Lost Symbol looks good (especially for Mr. Brown’s bank account) – there is already talk about a movie. The Da Vinci Code-movie raked in $758 million in 2006 alone. Colombia Pictures released the "Angels and Demons"-movie in May 2009, so the timing is perfect.

The Lost Symbol is expected to dominate the book charts for months and is already in the number one spot on Amazon's pre-order list. Publisher Doubleday might have all their ducks in a row, but other publishers are not that lucky.

Penguin had to reshuffle publication of William Trevor's new novel Love and Summer and Nick Hornby's new book, Juliet Naked.I n the fight for space on supermarket shelves and on best-seller lists, there is just no chance of getting a book to number one with Dan Brown’s out. Hornby is no slouch when it comes to bestsellers. His books, including Fever Pitch, High Fidelity and About a Boy have each sold more than a million copies New books by Coetzee, Iain Banks, Fay Weldon, Rachel Cusk, Sadie Jones, Margaret Atwood, Will Boyd and Nick Cave are also being launched before September 15, to avoid the Brown tsunami – no one can compete with the might of Brown (The Da Vinci Code has sold more than 81 million copies worldwide).

I have mixed feelings about it all – I love the fact that at least people read (even if it is Harry Potter and Dan Brown), but I don’t like these fashionable fruits of the pen pushing (better) novels out of the limelight.

Maybe book publishing has become too much of a marketing game?
Posted by Debra Daumier at 10:49 AM No comments: