The Devil is in the Details – Giotto’s Cloud Solution 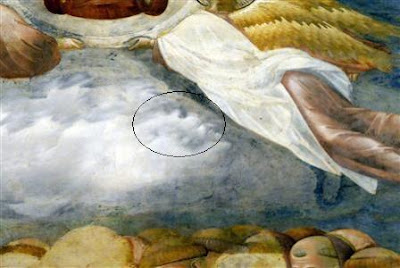 The basilica in Assisi is famous as the burial place of St. Francis. It is also known for its amazing frescos depicting the life and death of St. Francis, partly painted by Giotto di Bondone (known as Giotto) in the 13th century.

The basilica was severely damaged by an earthquake in 1997. Restoration work took years under the auspice of Professor Sergio Fusetti, the chief restorer.

But it was Italian art historian Chiara Frugone who made an amazing discovery. She noticed the face of a devil hidden in the details of clouds at the top of fresco number 20. It shows a profile of a figure with a hooked nose, a sly smile, and dark horns hidden among the clouds. Although the figure is difficult to see from the floor of the basilica, it can be clearly seen up close.

According to Fusetti, Giotto probably never wanted the image of the devil to be a main part of the fresco and may have painted it in among the clouds "to have a bit of fun." Quite likely, Giotto painted this devil to get back at someone he clearly despised.

Hurray for Giotto! His cloud solution gave a new meaning to “the devil is in the details”!