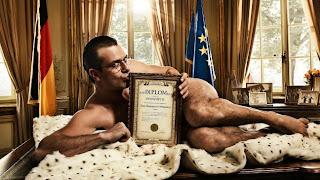 Today I watched (and thoroughly enjoyed) the German movie “Der Minister”. It is a wonderful satire of the Guttenberg plagiarism scandal.

As it turns out, this clever satire is itself a work of plagiarism. Several great lines seem to be taken from TV series such as the iconic British “Yes Minister” series – more specifically:  "It used to be said there were two kinds of chairs to go with two kinds of Minister: one sort folds up instantly; the other sort goes round and round in circles."

The screenwriter Dorothee Schon justified it by stating that content was taken from the media collage surrounding Guttenberg. An interesting legal argument indeed!

To refresh your memory, Karl-Theodor zu Guttenberg was a charismatic German politician who served as the Minister of Defense under Angela Merkel. Guttenberg received his doctorate from the University of Bayreuth (founded in 1975 and located in Bavaria, Germany) in the year 2007. After it was found that he had plagiarized parts of his doctoral dissertation, the university revoked is doctorate. Once he was caught, Guttenberg left German politics all together in 2011. He reinvented himself in the US.

Being an academic is a big deal in Germany. It helps with getting well-paid jobs and has substantial social standing. According to a  survey conducted by the German newspaper “Frankfurter Allgemeine Zeitung”  18.5 % of MPs in the German Bundestag carry doctor or professor titles. It is obviously a big plus for becoming a Minister! According to law professor Prof. Dr.Volker Rieble of the Ludwig Maximilian University of Munich, Germans suffer from “title arousal.” He points out that people in other countries are not as vain about their titles. (Israel is a good example - most people in middle and higher management have two academic degrees and seldom mention them). This obsession with academic titles obviously sparks the tendency to take short cuts to obtain the prized Dr. title.

As it turned out, the Guttenberg affair was not an isolated incident (as I originally thought). Following the Guttenberg debacle, several other German politicians were also caught in the act, including Prof. Dr. AnnetteSchavan who (ironically) served as the Minister of Education. Way back in 1980, she wrote a dissertation of a whopping 351 pages that had been gathering dust in the archives of the Heinrich Heine University in Düsseldorf until an anonymous blogger (SchavanPlag on Wordpress) published a long list of sections that were ripped off other works. The University ofDüsseldorf promptly stripped her of her Dr. title. She subsequently resigned her post in February 2013.

The German website “VroniPlag” is a living nightmare for German politicians that got their academic degree in a questionable way. The website states that: “VroniPlag Wiki is a scientific project without any political or commercial interests”. They obviously do a lot of due diligence.  Cave Doctor (Latin for: Dr. be aware)!

Other disgraced German politicians include:
Will this be the end of it? Lean back and wait!
By the way, Angie aka Angela Merkel is officially Dr. Merkel since she holds a doctorate from the University of Leipzig.

Posted by Debra Daumier at 8:54 AM No comments: 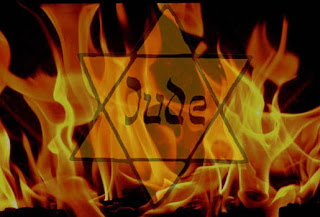 Anti-Antisemitism is firmly rooted in the minds of young Muslims. A whopping 80% of them state that Jews (mind you, not just Israelis but all Jews!) cannot be trusted.

The Youth Research Platform (JOP), an initiative of the Flemish government, conducted a poll under the supervision of Professor of Sociology Mr. Marck Elchardus of the Free University of Brussels (Vrije Universiteit Brussel).

The conclusions are upsetting to say the least. The level of anti-Antisemitism is staggering. According to the poll results, around 10% of non-Muslims and 45%-50% of Muslim youth is anti-Semitic.

This means that half of the Flemish Muslim youngsters are anti-Semitic. This estimation is even on the low side, considering that many of the polled youngsters did not even “partly agree” with negative statements about Jews in the poll. The real number of anti-Semitic Flemish youngsters is therefore closer to 75%. In the beautiful city of Antwerp, this number is even 85%.

Countless tweets and reactions in online articles contain blatant hate statements. Councilman Ali Özyürek (City of Arnhem, the Netherlands) thinks that it is not as bad as it looks, and politicians of Moroccan decent such as AhmedMarcouch point out that the widespread anti-Semitism under Dutch Muslims is just “fear mongering”.

As the poll illustrates, Muslims in Western Europe are anti-Semitic regardless of their personal traits, education level of their parents, educations, language skills, media use, income level per household or the city they reside in.

Conclusion: Anti-Semitism among young Muslims is a fundamental, deep rooted and universal problem. So how will we deal with it? Let's not repeat the mistakes of the 1930s!

(Source used: the excellent opinion piece by Bart Schut in Paris for the VK, image courtesy of www.sanfranciscosentenial.com)
Posted by Debra Daumier at 11:46 AM No comments:

Two pulmonary diseases aka lung specialists in the Netherlands decided to start a crusade against the tobacco industry. Doctors Ms. Wanda de Kanter and Ms. Pauline Dekker are specialists at the Red CrossHospital in the Dutch city of Beverwijk. They were frustrated that despite endless publicity about the lethal effects of smoking, smokers kept smoking due to the power of the tobacco lobby. The two therefore decided to start their campaign, stating: "We want to show who the tobacco lobbyists are and that they will feel guilty instead of smokers with lung diseases.”

To give some examples: professor Ms. Irene Asscher is stigmatized as a “Board Member of a company that kills permanently” due to her involvement with Philip Morris, a leading cigarette manufacturers. Dutch Minister Ms. Edith Schippers is recorded as the “Minister of the Tobacco Employers”, and Dutch Senator Mr. EelcoBrinkman, who is also a Board Member at Philip Morris, is described as “stupid and unscrupulous”.

The site is supported by public figures such as former Minister of Public Health Ms. Els Borst and former President of the Dutch National Bank Mr. Nout Wellink. Needless to say, the people exposed on the website are not amused. Reactions varied from “humbug” to “tasteless” and “the allegations are not substantiated”.

The main question: are the two initiators going too far with their website and are they tarnishing the reputation of people? Or is this naming and shaming a good way to finally try to end the supremacy of the all-powerful tobacco lobby and prevent lung cancer? You are the judge...
Posted by Debra Daumier at 1:05 PM No comments: