Poetry on Walls - Rimbaud's Poem on a Wall in Rue Férou 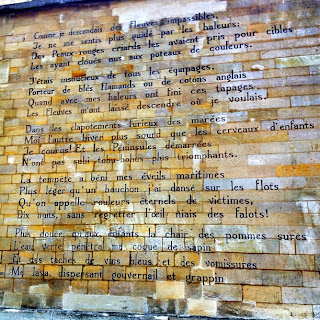 If you take a stroll along Rue Férou in Paris, you will see the poem Le Bateau Ivre (The Drunken Boat) by the French poet Arthur Rimbaud (1854 – 1891) painted on a wall. The location is quite significant; it is close to the location where Rimbaud at the tender age of seventeen recited it first.

(When I was drifting along the calm Rivers,
I no longer felt guided by the bargemen:
The gaudy Redskins used then as targets,
And nailed them naked to the colorful totem pole)

It is the first mural poem outside of the Netherlands. The project “Poems on Walls” started in the university town of Leiden way back in 1992 with a poem of the Russian poetess Marina Tsvetajeva. It was the first of many poets written by i.e. Shakespeare, Lodeizen, Verlaine, Rilke, Yeats, Achterberg, Nijhoff, Claus, Szymborska, and Lucebert. The project ended in 2005 with the poem De Profundis by Garcia Lorca.

If you want to read the full 100-lines poem (hand painted by Jan Willem Bruins) go to Rue Férou a small street that runs between the Place Saint Sulpice and Jardin de Luxembourg in the 6th Arrondissement de Paris.

Always be a poet, even in prose
- Charles Baudelaire
Posted by Debra Daumier at 3:02 AM 2 comments:

The Swedish government wanted to promote Sweden as a vacation destination, and came up with an innovative idea: let a citizen tweet on the official @sweden account for one week.

It all went well until the account was handed over to Sonja Abrahamsson. She can only be described as a train rack. May be she is channeling Chelsea Handler, but whatever the reason, it went sadly wrong. She tweeted about a lot of issues (most of them anti-Semitic and anti-gay), which made the whole well-intended social media experiment an international laughing stock.

She happily tweeted the following on behalf of the Swedish Nation:

“What’s the fuzz with Jews? You can't even see if a person is a Jew, unless you see their penises, and even if you do, you can't be sure!?”

“In Nazi German they even had to sew stars on their sleeves. If they didn't, they could never now who was a Jew and who was not a Jew.”

“Where I come from there are no Jews. I guess it’s a religion. But why were the Nazis talking about races? Was it a blood-thing (for them)?”

After bashing Jews, our Sonja went on to tweet (under the influence of vodka or illegal substances?):

“Oh strawberries… dripping with milk and urine. So tasty… “

“I found some pics I've shopped on da computer. This pic I call "hungry gay with aids"

It seems that Ms. Sonja Abrahamsson (Twitter name Sonja Abraham) is a mother. (Social Services anyone? Please save her kids!). She tweeted on the official Sweden twitter account about her kids: “Sometimes I just look at my children and think about the time when they had my vagina round their neck.”

And when she did tweet something positive about her native country, it went like this:
“I seriously need to get some eggs before I starve like an African child. Even if it’s not possible. In Sweden we have great social security.”

Ms. Abrahamsson (Judasson would be a better name!) describes herself as a “27-year old womanlike human being from Northern Sweden. . . In the autumn we had to pick up potatoes, in the winter we shoveled snow, in the spring we were confused and the summer forced us into growing thick skin and made us the bad motherf*ckers we are. Because of the big swarms of mosquitoes [sic] that will drain you on blood until death unless you can take it.”  Charming.Reminds me of a person I once met from Luleå.

She claims to be a columnist at Nyheter24. Nyheter24.se describes itself as “a modern news site with relevant news coverage for a target audience of 15 - 39 years of age”.  If so, I strongly advise them to fire her on the spot. There is no excuse for this kind of hate tweets.

Lesson to be learned: never let anyone tweet on your behalf without supervision!
Posted by Debra Daumier at 6:51 AM No comments:

Don't Mess Around With The Medical Profession! 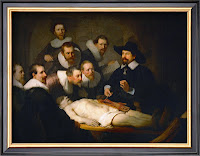 The NZ Medical Association has weighed in on the Prime Minister's prescription fee increase.

The Allergists voted to scratch it, but the Dermatologists advised not to make any rash moves.

The Gastroenterologists had a sort of a gut feeling about it, but the Neurologists thought the Administration had a lot of nerve.

The Obstetricians felt they were all labouring under a misconception.

Ophthalmologists considered the idea short-sighted. Pathologists yelled, "Over my dead body!" while the Paediatricians said, "Oh, Grow up!"

The Psychiatrists thought the whole idea was madness, while the Radiologists could see right through it.

The Surgeons were fed up with the cuts and decided to wash their hands of the whole thing.

The ENT specialists didn't swallow it, and just wouldn't hear of it .

The Pharmacologists thought it was a bitter pill to swallow, and the Plastic Surgeons said, "This puts a whole new face on the matter...."

The Podiatrists thought it was a step forward, but the Urologists were pissed off at the whole idea.

The Anaesthetists thought the whole idea was a gas, but the Cardiologists didn't have the heart to say no.

In the end, the Proctologists won out, leaving the entire decision up to the law makers in Wellington!

(Note: the author is as yet unknown. If you are the scribe of these clever words, please let me know so I can give you the credit you so deserve!)

Posted by Debra Daumier at 2:46 PM No comments: