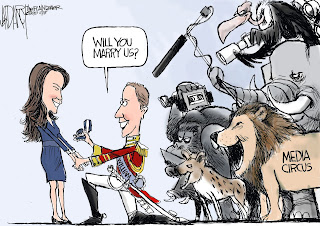 The Royal family, aka The Firm, has just launched its latest potential bestseller: Ms. Middleton, the future Queen. Poised Kate has the face that launched a thousand Tweets – to the delight of the blogsphere.

The engagement was a typical British affair – the couple sat stiffly together without any physical contact delivering well-scripted lines. Ms. M. showed the rock on her finger – a second hand bauble that once graced the finger of iconic Diana.
The son of the heir to the throne explained the sentiment behind it – so no, it is not due to the bad economy or lack of personals funds that he sprung for a new one. Personally, I would be freaked out by it. Katie made sure that her dress was the same color as the rock – the girl has style. Her outfit was a far cry from the ill-fitting suit that her fiancé’s mother once wore.
The reaction of her future father-in-law was hilarious. He mumbled something along the lines of “it’s about time”. Well, he was a heck of a lot older when he reluctantly dragged himself to the altar. At least Wills didn’t inherit Chuck’s mumbling speech. TV stations had to subtitle the future king’s comments – o dear! John Cleese once set next to the Prince of Wales at dinner and desperately tried to figure out if he said “we just declared war on France” or “my mother broke her leg”.

The timing of the announcement is perfect – the economy in the dumps and the country loves nothing more than a royal fairytale wedding. Obviously, Elisabeth’s subjects are too star-struck to wondering if the bill will be footed by the government out of their paid taxes.

The engagement is kicking of mass production of memorabilia, bookies will take bets on the exact date of the marriage, en the fashion world is a buzz on what the wedding dress will look like.
I advise Middleton to hire a good lawyer to help her with the prenuptial contract that will quite likely have the size of the Gutenberg Bible. After the marriages of 3 of her 4 children disintegrated, I am sure that the Queen’s lawyers will try to protect the royal assets. (I am also pretty sure that the engagement ring must be returned if the marriage crumbles; which would make it a loan - ugh).
The royal marketing machine is in full swing. The new member must be carefully branded to ensure the future of The Firm. Middleton is no dummy and has ample business experience. She patiently (craftily?) waited years to land her prince – without putting one foot wrong for all those years.

The beta-phase of the future Princess of Wales-product already started with Kate quitting her job. Once groomed, the new and royalty will be launched and (hopefully) revitalize the House of Windsor. But careful what you wish for – I predict that Kate is another Queen Mother. But then, that’s just what the Windsors need.

(Cartoon courtesy of www.cleveland.com)
Posted by Debra Daumier at 3:57 AM No comments:

The other night, I watched “Paris Qui Dort” (literally “Paris Which Sleeps”, also known as “At 3:25” and “The Crazy Ray”). It is a 1925 French Sci-fi comedy short directed by René Clair.

The film is about a mad doctor who uses a magic ray on citizens which causes them to freeze in strange and often embarrassing positions. People who are unaffected by the ray begin to loot Paris. It provides a wonderful insight into daily life in the 1920s: air travel (way before 9/11), restaurants, cars, apartments, etc. The plot reminded me of “FlashForward”, a great Sci-Fi series that never made it to the 2nd season (much to my chagrin). Funny how ideas resurface 80+ years later.....How will generations to come look at StarTrek, Babylon 5, and the like? Quirky like the Lucy Show? Or as a classic like Casablanca? Time will tell....
Posted by Debra Daumier at 12:29 PM No comments:

George Clarke, a film festival organizer in Belfast, claimed to found proof that time travel is possible. He discovered that a woman in the Charlie Chaplin movie “The Circus” (1928) seems to be talking on a cell phone.

The woman is passing in front of the camera holding her hand to the side of her face while talkin - similar to the way we talk into our cell phones. He therefore came to the conclusion that the woman is a time traveler. More sensible people came to a different conclusion: the woman is using her hearing aid (invented by Siemens in 1924).

It’s quite easy to understand why the woman cannot be a time traveler:

Well, unless you are traveling with Doctor Who in the Tardis, you cannot talk on you cell across time (or space).

Mr. Clarke and his "theory" did create a viral storm on Internet, so at least he had his nanosecond of fame. Not bad for an unknown filmmaker....

Posted by Debra Daumier at 3:07 AM No comments: