The fishy tale of the Israeli mermaid 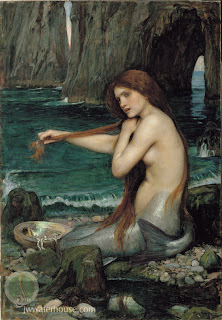 Every summer, most of the time during August, an alien/monster/mythical creature-story pops up.
This year, we enjoyed two: the Israeli mermaid and the Mexican alien baby (more on that one in my next blog post). It was for surea nice break from the overexposed Michael Jackson story (although he sort of fits in the alien scheme of things….)
Let us concentrate for now on our elusive mermaid. She was spotted in the Bay of Haifa during sunset, jumping and doing all kinds of tricks before disappearing. Sound like your average dolphin to me!
However, the small town of Kiryat Yam (“sea resort” in English, located just North of Haifa in case you are too lazy to google it) was quick to offer a cool million US$ to anyone who can supply proof.
Nice PR stunt if I ever saw one and uncannily similar to the whole Loch Ness spiel.
SKY news (UK) and ABC (USA) featured the news, as did other global media. Of course, our mermaid is a comely young woman. Funny, there are never sightings of ugly old fat mermen…..Maybe they dwell in an elderly cave home somewhere at the bottom of the sea and are not allowed to swim out?
Eyewitness Shlomo Cohen claimed, "I was with friends when suddenly we saw a woman laying on the sand in a weird way. At first I thought she was just another sunbather, but when we approached she jumped into the water and disappeared. We were all in shock because we saw she had a tail." Wow, our Shlomi must have been heavily under the influence!
I am still trying to figure out how a fishtail-impaired creature can jump up and dive into the sea in a New York minute. She must be one hell of an athlete, that one!
Strangely enough, our Shlomo did not take a pic with him mobile phone – a standard accessory for almost all Israelis. Pity, it would have made him an instant millionaire. May be he didn’t follow through due to the old Scottish joke (when two fishermen caught a mermaid, one of them immediately threw her back into the water. When asked “why”? he responded “how?”)
While the main media are debating the issue, the Weekly World News had the best coverage on this fishy subject. They quoted one resident as saying, “we are so shocked that they have begun showing up here. They usually observe below the surface, but we think this year they may be looking to spend the holidays with local residents.”
Another witness said: “Those mermaids are usually so snobby, always drumming up excitement and then leaving to go back to the depths of the sea as soon as they get some attention. I hope they choose one or the other before they start upsetting the locals.”
“They just looked like pretty ladies with funny feet to me,” said one elderly resident. “But if they want to observe the holidays with me, I’d be happy to have them!” This laudable sentiment was not shared by one woman who snubbed: “They need to go back where they came from. They are scaring the children and bringing too many strangers to our shore. It’s disrupting the peace.”
The article went on stating that town officials have begun erecting small pools of water in local synagogues in hopes that the mermaids will feel welcome to spend their holiday (Jewish New Year) with residents. “We’ll do what it takes to make the merpeople feel as though they can come together with us as a unified people…of sorts.”
That’s the spirit! No word from the religious authorities if they consider our marine creatures Jewish or not. Ah well, for sure the reform jews will welcome them with open arms!
The whole story reached a new entertainment level (at least in my eyes) when the Israeli online newspaper Ynet claimed that an American organization claiming to defend the rights of mermaids is threatening to appeal to the International Court of Justice in The Hague. I would love to preside over this one as a judge! I would encourage the whole court to conduct a "descente en lieu" (for the legal eagles among my readers) - let's have beach party on the shore of Kiryat Yam and wait for the mermaid to join!
Interesting enough, the organization is Brooklyn-based "Mermaid Medical Association" (MMA). How mermaids can effort US medicare is a mystery to me - even if Obama's health plan reform goes through. No word from the mermaid what her stand on this issue is. According to the local yellow pages, there is a medical service organization on 1704 Mermaid Avenue (Coney Island). My educated guess: the organization took their name from the location, not from the sort of patients they treat! No word from the PR office or managing director of the "official" MMA. They are quite likely thanking their lucky stars for this free publicity windfall......
(Since there is no picture available yet of our Israeli mermaid, I used the painting of J.W. Waterhouse for illustration)
Posted by Debra Daumier at 6:21 AM 1 comment:

It’s no secret that I love social media, like most writers. I am on LinkedIn, Facebook, and Twitter.
(Feel free to contact to me on any of these social platforms!) I gave MySpace a pass – I test drove it, and didn’t like the spam I got.
Twitter is the latest Hot Thing – until something else comes around. It seems that everyone is tweeting to some extend: individuals like you and me, celebrities, and companies.
The tricky part with Twitter is that your “mini-blog posting” must be limited to 140 characters. This poses a huge challenge to the best of us. Tweeting about simple things is easy “going on vacation”, “still stuck in traffic”. If needed, a link or a shortened link (TinyURL) can be added in case you read a great article you want to share (or, as in my case, entice Twitterati to go to my recently published short story "Revenge will come....."– hint, hint!)
In case you wonder, yes, you can follow anyone you want to your heart’s content without being a stalker….hurray for cyberspace!
But I would never have thought that Twitterati could be such a source of amusement! (The word Twitterati is my invention; sounds a heck of a lot better than “twits” – ask any Brit for that connotation! The singular form is Twitterarus (m) or Twitterata (f) – Julius Caesar would have been proud of this. Come to think of it, he probably would have tweeted about his good-for-nothing relatives and of course about De Bello Gallico from the Forum Romanum, during senate meetings, and from the battle fields).
US politicians (already an ongoing source of media fodder for global comic relief) have embraced Twitter as well. It should come as no surprise that the two most prominent political Twitterati are…..Sarah Palin and Arnold Schwarzenegger!
Let’s start with our “I’ve gone fishing” Alaskan huntress. She twittered: “& mamma bear doesn’t look 2 anyone else 2 hand her anything; biologist say she works harder than males, is provide/protector for the future”.
In response, Durer’s rhino promptly quipped: “We have learned today that: bears are Real Americans that don't ask for or take handouts; and male bears are deadbeats and just sit around the forest in their boxers eating salmon and drinking berry juice.”
OK, her tweet might be a bit simple, but at least she is clever enough not the address major issues – or is she? Think again: our favorite pit bull with lipstick decided to respond to a new report on ethics charges against her on Twitter. She happily tweeted: “Re inaccurate story floating re:ethics violation/Legal Defense Fund;matter is still pending;new info was just requested even;no final report.”
My dear Saraleh, please listen to your legal team and don’t tweet about such sensitive topics! You should have stuck to your original statement calling any allegation that the defense fund accepted any inappropriate donations "misguided and factually in error." (That’s my advice as a lawyer – free of charge!)
She is not alone in her twitter blundering – our Ahnold is not far behind. Under his watch, the California deficit is a staggering $26 billion (try to figure out how you would spend that kind of dough to enhance your lifestyle!)
After negotiating a deal that will (hopefully) close the gap, Schwarzenegger posted a puzzling video message on his Twitter page. In it, the governor is wielding a huge knife, talking about selling state cars signed by the "celebrity governor." Even Aaron McLear, the governor's press secretary, couldn't explain the knife: "I don't know why he is holding a knife. The message is in what he is saying, not what he is holding in his hand."
L.A. residents were heavily underwhelmed by both A.S. and his prop, as illustrated by the comment of local Giovanni Matallane: "he should be focusing on other things besides signing cars and holding a knife ... and being on Twitter."
Matt Littman , a political speech writer and blogger, was even more explicit: “7.3 billion in education cuts ... Kindergarten through college teachers are getting laid off and he wants to talk about signing cars at an auction ... Why doesn't he sign their pink slips?" and ended with the suggestion that the best way for our Arnoldus Twitteratus to proceed, would be to quit – Sarah Palin-style.
Wiser politicians stick to distributing press releases and friendly editorials on their Twitter account. Clever and proper, but hey, what would be the fun of that?! Don't we all love a mishap that could "launch a thousand" tweets?
Posted by Debra Daumier at 2:45 AM No comments: