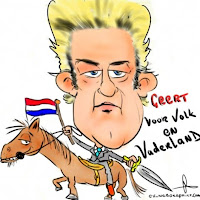 You might have heard of Geert Wilders, the bad boy of Dutch politics. He made a name for himself with his 17-minute documentary Fitna (which roughly translates from Arabic as "strife"). In it, he juxtaposes the Koran with 9/11 and other atrocities. He is currently heading a political party called

Wilders is head of the popular Freedom Party. After the 2010 election, the Liberal Party has found itself relying on Wilders to support its coalition with the Christian Democrats. The Freedom Party remains outside the government and “tolerates”the current coalition. De facto: Mr. Wilders is the Puppet Master, cleverly drawing the spotlight on his party and himself (often to the confusion of foreign politicians, who assume that he is the Prime Minister).

Back in 2007, he was voted politician of the year in 2007 by the Dutch political press, partly because of his "well-timed one-liners". Wilders has a way with words which is unprecedented in Dutch politics.

During the last few days, the Dutch equivalent of the State of the Union is being discussed in Parliament. Due to the beautiful weather, not all MPs showed up, including the majority of the Green Left. Wilders pointed out that his entire caucus (24 MPs) came back from holiday to debate. He went on to state that the Green Party MPs couldn't pull themselves away from the beach and labeled them 'the beach party' for the rest of the afternoon.

Wilders also repeatedly referred to opposition Labour Party leader Job Cohen as the Prime Minister’s “corporate poodle”, stating: "Mr. Cohen runs around the prime minister’s yard, yelping and peeing on a tree, but when the prime minister arrives he jumps up in his lap." Needless to say, Cohen was Not Amused.

And the story goes on.... Last Thursday, Prime Minister Mark Rutte and Wilders clashed again. At one point Wilders addressed Rutte with the historic words: ‘Behave yourself, man.’ (or “get a grip on it, man”). Rutte was upset that a member of Wilders’party implied a week before that the Turkish prime minister Recep Tavvip Erdogan as an ‘Islamic monkey’.

Wilders has a way with words. Dutch politicians are not used to this kind of debating. How did the Dutch public react? They love it! T-shirts are already available......
Posted by Debra Daumier at 8:14 AM No comments: