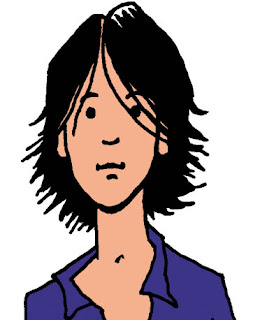 Austrian editorial cartoonist Rachel Gold is a “young, pretty Jewish immigrant girl from Israel”. She got a job as a cartoonist at the Wiener Zeitung, replacing Markus Szyszkowitz. The Kronen Zeitung editor Hans Dichand let Markus go since some of his cartoons had offended politicians – especially Werner Faymann who serves as Austria’s chancellor since 2008 despite some scandals. Faymann and Dichand were very close friends until “Uncle Hans” passed away in 2010.

Rachel was hailed as one of the only two female political cartoonists in Austria. According to her Wikipedia page, Ms. Gold was born in Tel Aviv in 1978. She was raised in Israel and moved to Vienna in 1999, where she has been a freelance artist since 2004. She also has a Facebook page and her own website where she posts her cartoons. Apart from working for the Wiener Zeitung, she also created cartoons for the Tiroler Tageszeitung.

All was well in the editorial cartoon world until an editor became suspicious of Rachel and started digging. In the end, Gold’s cover was blown. Neither Szyszkowitz nor Gold commented or made any statement.

However, Daryl Cagle, a fellow editorial cartoonist for MSNBC. thinks that he understands what drove Markus. “Rachel was created in response to Markus’ frustrations, working under editorial constraints at his former newspaper, the Kronen Zeitung.”

He also believes that Szyszkowitz purposely chose a Jewish identity. He argues that “Markus is convinced that his editors, and the Austrian readers, were willing to accept more hard-hitting, liberal cartoons from the young, pretty, Jewish immigrant girl from Israel. Given Austria’s harsh history, Markus believes that Rachel gets more editorial leeway because she is Jewish, rather than because she is a woman.”

Whatever the reason, it worked out fine in the end. Both Szyszkowitz and his alter ego Gold are currently working at other newspapers happily posting their cartoons for our amusement.
Posted by Debra Daumier at 11:36 AM No comments: