In their more than 1,000 page biography “Vincent van Gogh. The Life”, the two authors explained how the Dutch painter was being harassed by Gaston and René Secrétan. According to the two authors, things heated up on July 27, 1890. Trigger-happy René Secrétan shot Van Gogh, who died two days later.

They claim that suicide was out of the question, since the suicide shot was sloppy (somewhere in the stomach area) and Vincent did not leave a suicide note. They also point out that the high output of paintings during the last week of his life did not indicate a lack of energy. Furthermore, there were lots of rumors in Auvers at the time that two youngsters had shot Van Gogh.

Louis van Tilborgh and Teio Meedendorp are connected to the Van Gogh Museum in Amsterdam. They published a book that concludes that Van Gogh did indeed commit suicide. They furthermore state that the murder theory of Naifeh en Smith is based on speculations.

The two Dutch researchers have solid evidence. The suicide shot was well-aimed. The wound was “between 3 and 4 centimeters under the left nipple” as stated by the medical examiner at the time. Furthermore, there was a brown discoloration around the wound that indicated “burnt gunpowder”. The gun must therefore have been fired at close proximity and not by René Secrétan. Quite likely, it was Vincent himself who fired the fatal shot. Furthermore, Vincent’s last paintings reflect extreme solitude and angst.

For now, Vincent van Gogh was not a homicide victim. Sadly enough, the genius did indeed take his own life. So let’s celebrate his genius, and stop speculating about his demise!
Posted by Debra Daumier at 2:18 AM No comments:

“Selfie” has been named as new English word of 2013 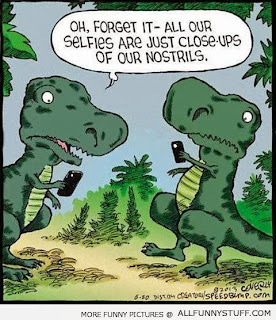 According to Judy Pearsall, chief editor of Oxford dictionaries, “selfie” was first used in 2002 in Australia. 'Hopey' posted a photo of himself on September 13, 2002 with the text:

“Um, drunk at a mates 21st, I tripped ofer (sic) and landed lip first (with front teeth coming a very close second) on a set of steps. I had a hole about 1cm long right through my bottom lip. And sorry about the focus, it was a selfie.”

The term became popular throughout the English-speaking world during 2013. The use of the word “selfie” increased 17,000%. A search on photo sharing app Instagram retrieves over 23 million photos uploaded with the hashtag #selfie, and a whopping 51 million with the hashtag #me.

The Oxford dictionary defines “selfie” as: "photograph that one has taken of oneself, typically one taken with a smartphone or webcam and uploaded to a social media website."

According to publisher Katherine Martin, the term “selfie” is a typical Australian word pun similar to “barbie” for barbecue, “firie” for firefighter and “tinnie” for a tin of beer.

Other words that made the shortlist:

Posted by Debra Daumier at 10:25 AM No comments:

You Can Live Like an Agatha Christie Character – For a Price 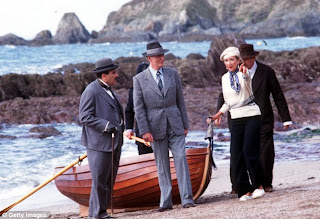 Bantham is one of those quaint English villages were time seems to stand still. Located on the shores of south Devon, it consists of 25 cottages with thatched roofs, one shop and a pub. The hamlet is part of the family-owned Evans Estates. It is currently for sale – for Euro 11.9m., you can be the proud owner of the village; purchasing the whole estate will cost you Euro 41.7m. However, you will get more than just prime real estate; you will buy literary history.

Nearby Bigbury Beach, one of the region's largest beaches, can also be purchased. A TV adaptation of Agatha’s Christie’s “Evil Under The Sun” was filmed there, as was the British TV show Lovejoy.

From the beach, there is a spectacular view of Burgh Island, which is only 250m away and can be reached on foot when the tide is out. The Art Deco Burgh Island Hotel was not only the second home of Torquay-born Christie, but also of Noel Coward. Agatha Christie wrote both "And Then There Were None"as well as "Evil Under The Sun" while she was staying at the hotel during the 1930s.

The residents of Bantham fear that their village will be sold to an investor for real estate development. They hope that Richard Branson, who a regular visitor, will be the new owner.

Want to live like Miss Marple? Would you like to pen at the Burgh Island Hotel? Or get inspiration while soaking up the sun on Bigbury Beach where Poirot did his sleuthing?

You can! But for a price….
Posted by Debra Daumier at 2:37 AM No comments: 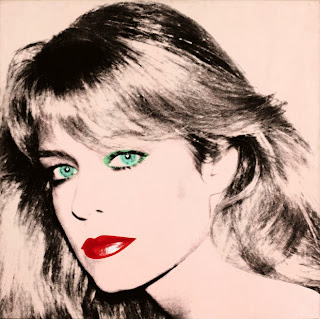 It comes across as an episode of Law and Order. It has all the elements: a priceless piece of modern art, an iconic actress who tragically passed away a sleazy ex-lover, a former quarterback, and a respected university.

It all started after Farrah Fawcett passes away and left all her artwork to her alma mater, the University of Texas at Austin. Her art collection included two portraits that the late Andy Warhol made of her. Created in 1980, the stunning paintings consist of synthetic polymer paint and silkscreen on canvas. One portrait already found its home in the University's Blanton Museum of Art. It’s the other one that is creating a legal and media storm.

The second portrait is currently in the possession of Ryan O’Neal, the former partner of the popular actress. O’Neal claims that Warhol painted one portrait as a gift for Farrah and the other one for him. He went on to state that although he handed over his one to Farrah, it was not a change of ownership.

O”Neil admits that “his” portrait normally hang in his Malibu beach house. He claims that when he was cheating on Farrah with another woman, his new lover told him that Farrah’s portrait made her “uncomfortable” - quite understandable considering the piercing eyes. He further stated that he therefore gave the portrait to Farrah to keep it for him.

The Texas Board of Regents wholeheartedly disagreed. Since the University of Texas is entitled to all art works formally owned by Ms. Fawcett, it promptly sued O’Neal stating: "The Warhol portrait is an irreplaceable piece of art for which legal damages could not fully compensate."

Stay tuned!
Posted by Debra Daumier at 5:58 AM No comments: 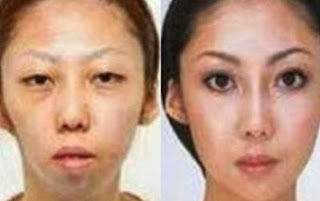 According to the story, Mrs. Feng underwent major plastic surgery before her marriage to become beautiful. She forked out a whopping $100,000 for various plastic surgery procedures in South Korea. The skillful surgeons created her flawless bone structure and wide-eyed look.

She consequently dapper successfully married handsome Jian Feng. So far, so good. But once she gave birth to her baby girl, trouble started.

Once he clapped eyes on his “incredibly ugly” baby daughter, he suspected that she was not his offspring. He assumed that the child was the result of his wife’s illicit affair. However, DNA test showed that the baby was indeed sired by him.

He subsequently found out that his beautiful wife got her beauty from the surgeon’s knife, and not from good genes.

He promptly sued his wife, stating: “I married my wife out of love, but as soon as we had our first daughter, we began having marital issues. Our daughter was incredibly ugly, to the point where it horrified me.”

A local court reputedly awarded him $120,000 based on the fact that she had tricked him into marrying her under “false pretenses”.

This story has come under scrutiny, with several sources claiming it’s a hoax.

But even it is, isn’t it a wonderful warning about the consequences of extensive plastic surgery?

You will be the judge!
Posted by Debra Daumier at 12:14 PM No comments: