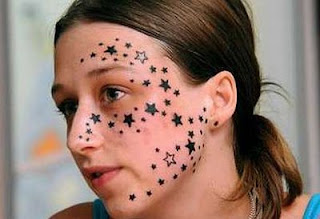 The Belgian teenager Kimberley Vlaeminck (18) from Kortrijk (B) decided that she wanted three dots next to her right eye.

She went with her father Diego and sister to her local tattoo artist, ex-Parisian Rouslan Toumaniantz of Tattoo Box. Daddy was willing to pay for it, since the whole family has tattoos. The fact that she only speaks Flemish and that he only speaks French didn’t stop our enterprising girl to go under the tattoo needle. Fifty-six stars later, she claims that she asked him to tattoo only three small stars next to her left eye and not the whole Milky Way (my words, not hers).

Half a starry face later, when her family and boyfriend came back from eating ice cream, the reactions were less than enthusiastic. Our girl defended herself by saying “I must have dozed off”. She is a hairdresser and started working that day at 5am, you see…..

The tattoo guy stated that she did indeed gave him permission, but freaked out when her father and boyfriend disapproved. He cannot remove the tattoos himself, but is willing to lower the price of his handiwork to Euro 50 (just in case you want to know: that's the price of 5 tattooed stars).

She filed a complaint at the police station and is seeking damages. The spokesperson of the Kortrijk law enforcement (Tom Janssens, who for sure has better things to do during working hours), stated that the investigation will show if this is a case of bodily harm, of miscommunication or that Ms. Vlaemink simply changed her mind.

In the mean time, M. Rouslan Toumaniantz is not unhappy at all – he is now a well-know "artist". I cannot blame him, excellent free publicity for a young business, n'est-ce pas?

As for our little hairdresser – I just don’t get it. Getting tattoos is a personal matter (I am one of the few members in my fitness center that is tattooless – and I like to keep it that way!), but may be it would have been wise to avoid the face? Even Angelina Jolie doesn’t have any ink illustrations there!

As for falling asleep – makes as much sense as spontaneously dozing off during your standard dentist appointment.

As a lawyer, I can tell you that the “I didn’t give permission”- defense just wouldn’t fly, since she knew that the guy doesn’t speak any Flemish. Caveat emptor!

Both the French and the Dutch have a lot of jokes about the Belgians…that they are not that clever (to put it mildly and political correct). Well, this girl for sure doesn’t help matters!

For all you parents concerned about your offspring tattooing body parts - let them have a look at her starry face…..and whatever you do: don’t go out for ice cream when your heirs are falling asleep during the procedure!
Posted by Debra Daumier at 4:07 AM No comments: