Something is happening in the State of Belgium 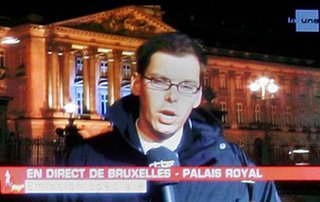 Belgium is known for its chocolates and waffles. Apart from that, it’s one of the least known countries in Europe.
OK, some art lovers might know that Van Eyck and P.P. Rubens hailed from what is now Belgium, but the little country squeezed between France and The Netherlands doesn’t exactly have a global image.
Since its creation and split from its northern neighbor, it has been divided between the Flemish (Dutch) speaking north and the French speaking south.
The Belgians are often the victim of jokes, but it’s rare that they are the ones creating a hoax.
But that is what happened.

December 2006, the national broadcasting company in French, RTBF , broke into regular programming with an urgent bulletin:
"Flemish parliament has unilaterally declared the independence of Flanders (the Dutch speaking part of Belgium)” and that King Albert and Queen Paola had left on the first air force plane available.
Grainy pictures from the military airport showed dark silhouettes of a royal entourage boarding a plane, possibly on their way to the Congo.
RTBF then aired an interview with secessionist MP Jean-Marie Dedecker, who proudly declared: "At last my dream has been realised".

The broadcast showed 50 or so jubilant demonstrators waving the yellow-and-black flag with the Flemish Lion outside the legislature.
A small crowd of monarchists rallied outside the royal palace waving the Belgian flag.

Only after a half hour did the station flash the message: "This is fiction."
Fadila Laanan, the Walloon media minister was the one who forced the station to run the disclaimer. Too little, too late.
Not only Belgians fell for the hoax, worried ambassadors asked what they had to tell their capitals.
As with Orson Wells famous “The War of the Worlds”, it took some time before people realized it was a hoax.

The program makers defended the hoax, stating that they wanted to spark a debate about the risk of Flanders' secession and the possible collapse of the country.
RTBF's news chief, Yves Thiran, told the BBC that the program was meant as a wake-up call: "Our intention was to show Belgian viewers the intensity of the issue of the future of Belgium and the real possibility of Belgium no longer being a country in a few months. We obviously scared many people - maybe more than we expected."

Not everyone saw it that way - Prime Minister Guy Verhofstadt slammed the show, adding that it would only serve to increase tensions between Dutch-speakers in Flanders and French-speakers in Wallonia.
"It is very bad Orson Welles, in very poor taste," remarked his spokesman.
"In the current context, it is irresponsible for a public television channel to announce the end of Belgium as a reality presented by genuine journalists."

The good news: it brought Belgium to attention of the world and we don't have to memorize two new country names and capitals.

Quel dommage! Wat een pech!
Posted by Debra Daumier at 2:39 AM No comments: