Venezuelan Clinica Dempere is a plastic surgery clinic in Caracas. It promotes its 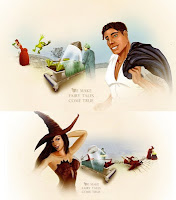 services in a clever, tongue in cheek, way. Ad agency ZEA BBDO produces clever ads based on the makeovers of fairy tale characters.

Under the slogan “We Make Fairy Tales Come True”, the frog is turned into a prince, and the ugly witch in a sexy vixen. But their latest ad might get them in hot water...it depicts the makeover of the Andersen’s mermaid into a buxom, stiletto wearing, beauty.

The problem? She closely resembles Ariel of the Disney movie.] The ad created a storm in a teacup in the USA. Many critics were not happy with Disney’s portraying of princesses, claiming that they have the impossible figure of a Barbie doll and are therefore sending the wrong message to young girls about the definition of beauty. But worse, the ad might infringe on the IP of Disney. 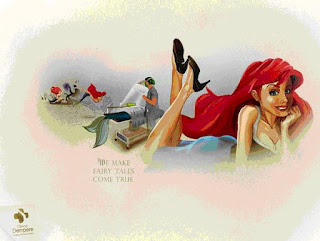 That company is notorious for going after any infringement. Personally, I do not see the problem. The ads are clearly meant for discerning adults with a cheeky sense of humor. I doubt if any little boy or girl would take them seriously.

As a parent, I would be far more concerned about the original fairy tale by Andersen, where the op is performed with a sword (and no anesthetics a far as I remember!)

Disney’s legal eagles might take action, but ifor now, Clinica Dempere is enjoying its free press! Beats the hell out of issuing press releases and having a PR company promote your services for lots of $$$$.

It I would work for Clinica Demere, I would say “bring it on”, and contemplate which fairy tale to use in my next ad...Cinderella springs to mind!
Posted by Debra Daumier at 9:21 AM No comments: 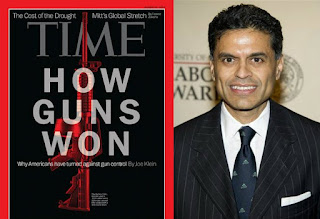 Again, a famous columnist admitted of copying someone else’s writings. FareedZakaria is a Washington Post columnist, TV host of CNN’s foreign affairs show GPS, as well as an editor-at-large at Time.
Mr. Zakaria has apologized for using several paragraphs in his column in Time magazine that were written by another writer saying that he made "a terrible mistake. It is a serious lapse and one that is entirely my fault." As a result, his column has been suspended for a month.

In a separate statement, Time spokesman Ali Zelenko said the magazine accepts Zakaria's apology, but would suspend his column for one month "pending further review."

Media reporters noticed that passages in Zakaria's column about gun control that appeared in Time's issue 20 of August issue closely resembled paragraphs in an article written by Harvard University history professor Jill Lepore. Her assay was published in the April 2012 issue of The New Yorker magazine.

Zakaria's column "The Case for Gun Control" starts with a paragraph containing the following text: “Adam Winkler, a professor of constitutional law at UCLA, documents the actual history in 'Gunfight: The Battle Over the Right to Bear Arms in America.' Guns were regulated in the U.S. from the earliest years of the Republic."

Jill Lenore's New Yorker "Battleground America" assay starts with: "As Adam Winkler, a constitutional-law scholar at U.C.L.A. demonstrates in a remarkably nuanced new book, 'Gunfight: The Battle Over the Right to Bear Arms in America,' firearms have been regulated in the United States from the start."

In his statement, Zakaria "unreservedly" apologized to Jill Lepore, the Time’s editors and his readers.

Was it enough? Obviously, since  both Time and CNN have reinstated Fareed Zakaria after conducting their plagiarism investigations, stating that it was "an unintentional error and an isolated incident".


Yeah, sure, and I am a supermodel!

(Image courtesy of TalkoftheTown)
Posted by Debra Daumier at 10:35 AM No comments:

The first time I heard about “the scent that makes you loose weight” on Fox News, I checked my calendar. Nope, it was not April Fool’s Day. So I decided that it was time to check out this strange bit of news.

Turns out that the French perfume house Robertet has created a fragrance claiming that it helps weight loss. The quite improperly named Prends-Moi Eau De Minceur or Take Me (in the sexual meaning of the word) Slimming Scent. How very French.

According to the Daily Mail, over 6,000 women in the UK alone have subscribed to a waiting list for the fragrance that will set each one of them back for around $50 for 100 ml.

According to the manufacturer Veld’s, the scent contains Betaphroline which stimulates the release of B-endorphins in the skin. This is supposed to trigger "an immediate sensation of well-being, a reduction in stress and an increase in contentment reducing the need to overeat."

This “amazing” (and absolutely unproven) chain of events is supposed to result in weight loss. A mix of other ingredients, such as Spirulina, Caffeine and Carnitine, should help to breakdown body fat.

The Centre of Biological Research and Cutaneous Experimentation claims that 70% per cent of women in a trial said that the perfume did indeed have an effect on appetite, influencing eating habits and 75% found their well-being boosted.

There are two problems with this lab research:


Dr. Kim Bell-Anderson of the School of Molecular Bioscience at the University of Sydney found that there are "absolutely no peer reviewed publications to support this product." She could also not find even one shred of research suggesting that a product could permeate the skin to increase endorphin release.

It this product is really successful, should it not carry a warning for women that have eating disorders? Why are there no supermodels toting the fragrance? Well, we do know why......

Veld’s obviously has a great marketing and legal team. They are very clever with their wording by stating that “people feel as though their appetite is reduced" rather than making solid claims.

If you want to spend money of weight loss, please change your diet and go to a fitness center.  Please note: women that ordered the fragrance also tried to buy the Brooklyn Bridge.
Posted by Debra Daumier at 1:22 PM No comments: