The Case of the Cursing Parrot 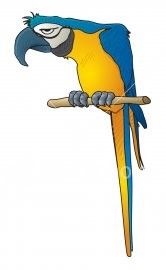 We all read stories or watched pirate movies with cursing parrots perched on the shoulder of a mean, one-legged sailor.
Well, such a bird is currently making headlines.
The Bird (name unknown) has the habit of screaming phrases such as “maniac”, “homo” and “son of a bitch” at regular intervals.
The bird belonged to an orthodox Jew, who bought it as a pet for his kids.
Needless to say, he was not too happy by the verbal outbursts of the creature.
I am still puzzled that he didn’t find that characteristic out before he purchased the bird, but who am I?
Anyway, the pater familias went to the rabbi to find out how to handle the feathery culprit.
The rabbi informed him that the parrot should be slaughtered since he “sins and causes others to sin.”
Personally, I thought that you only sinned if you purposely commit an act that is sinful, but obviously, I am wrong (being a woman and not orthodox probably accounts for that).
The family father is a patient of a holistic doctor who decided to come to the bird’s rescue.
No good deed goes unpunished, so the good doctor had to fork over $ 3,000 to save it from death row.
The doctor was now stuck with a bird that has quite a mouth on it.
So how did our medical professional handle the situation? Yep, you guessed it – he consulted a rabbi!
The second rabbi recommended that the poor parrot either be put to death or have his tongue severed, which brings back images of mediaeval witch trials, doesn’t it?.

The story hit the headlines and all kinds of organizations and individuals came to the bird’s defense; some of them even protested in front of the doctor’s house.
The “Let Animals Live Foundation” took it a step further and applied to the court to prevent the pending execution (or tongue mutilation).
In its petition, the Foundation stated that there is a reasonable basis to assume the parrot will be subjected to suffering and cruelty.
Therefore, the court must interfere with a restraining order.
The ruling judge agreed and issued an injunction protecting the parrot from being harmed in any way.
For now, our feathered friend is safe.
The order will apply until a further decision is made.
In the next few days, a deliberation will be held and the court will seal the parrot’s fate.
Our good doctor is planning to attend the court session accompanied by the parrot in question.

Let’s hope our bird friend will not engage in foul language in court – that’s the prerogative of lawyers!
Posted by Debra Daumier at 2:04 AM No comments: