Halloween and all that

Halloween is coming up. Originated in Celtic times in Ireland, it’s the ultimate retail sales booster in the US. Early immigrants from Scotland and Ireland brought the traditions of Samhain, All Hallows Eve, and All Saints Day to the New World. Their descendents are now carving jack-o-lanterns, tell ghost stories, dress up in scary costumes, and go from door to door begging for treats. Isn’t European culture fun?
Funny enough, all the ghosts, goblins, leprechauns and the like hail from the cold shores of England, Ireland, Wales, Scotland and Cornwall.
The romantic French have no spooky traditional to speak off, which is kind of ironic if you think about it. Obviously, for Otherworldly Creatures traveling across the Channel is more taxing than crossing the Atlantic. Go figure.
Personally, I don’t believe in ghosts or previous lives.
I have my hands full with this life, thank you very much and the idea to have a next or a previous one is just too depressing to even contemplate.
This previous life stuff is a mystery to me anyway. People that claim to know and/or relive about their previous lives, always had interesting ones. You must have read about them as well: they were aristocrats in French or Italian courts, princesses in ancient Egypt or priests in Roman and Celtic times.
Statistically speaking, they should have been dirt poor and starving farmers or laborers (not to mention slaves) who died of the black plague or some other epidemic decease. This doesn’t seem to be the case, so it makes me wonder: is there a class society in our previous lives? Obviously, the poor don’t reincarnate well. I find this a gross injustice: previous lives for all or for none, I say!
Coming back to Halloween, I find this “dead crossing into the world of the living” concept scary. I like everything to be in its place: the living here and the dead there (or wherever they hang out). I had my share of living zombies in my high-tech workplace – no need to add a few more into the mix.
Don’t get me wrong – I have nothing against a good fancy dress party. So if you feel the urge to invite me, don’t hesitate. I will put on my really scary costume – my judge’s robe from my previous life!
Posted by Debra Daumier at 11:23 PM No comments: 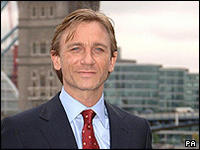 Daniel Craig is the next James Bond.
This announcement hit the headlines on all the newswires between news stories about insurgents in Iraq and CIA probe hearings. I bet it will also the most discussed headline. Ah, isn’t it nice how we have our priorities right?

Just in case you wonder, Craig is a little known British actor who appeared in the British gangster caper "Layer Cake." He also played alongside Paul Newman in "Road to Perdition" and was poet Ted Hughes opposite Gwyneth Paltrow's Sylvia Plath in "Sylvia."
The choice of Craig came to many as a surprise – Pierce Brosnan, who played Bond in the previous four Bond movies, was shaken to the core that he lost out.
The reason has to do with dollars and cents – James Bond is not only an icon, but also one of history's most profitable film franchises.
The 20 official Bond films have netted nearly $4 billion in global ticket sales, of which Brosnan's four films grossed around $1.5 billion, industry figures show.
Sony Pictures Entertainment and Metro-Goldwyn-Mayer Inc. 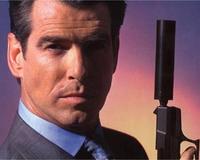 are the Hollywood backers of the new Bond film called "Casino Royale". They considered keeping on Brosnan because of his box office cloud.
The producer, Barbara Boccoli, has her finger firmly on the pulse of the public and visited websites devoted to all things Bond. As a result, she decided that the 21st Bond movie needs fresh blood, with the plot of Casino returning to the start of the spy's career and therefore requiring a younger actor- hence 37-year old Craig.
For the 52-year-old Brosnan, this came as a "body blow."
"I was looking forward to making it edgier and grittier, and for all of that to go down in one phone call was highly disappointing," he told the San Francisco Chronicle.
Personally, I don’t quite see how the suave Brosnan, who always struck me as a mannequin, could go “gritty”. Makes as much sense to me as Courtney Love playing the part of Margaret Thatcher.

The announcement of the next James Bond was a PR bonanza - Craig swept up the River Thames on a power launch to a news conference, escorted by Royal Marines boats. Missing the track record of previous Bond actor Roger Moore, and not blessed with the charisma of Sean Connery, Craig was launched as the “first blond Bond”. Hurray, finally a blond Ken doll! I'm sure women around the world were waiting for this...
During the photo op, Craig posed in the shadow of Tower Bridge “wearing a blue suit and red tie” as the media faithfully reported. It made him sound like the Queen on a state visit.

If the Bond producers wanted to go grittier, they should have opted for Colin Farrell. Now that’s a bloke with a personality! And they could always do a voiceover, as they did with Bond chicks in the past who couldn’t beat their Cockney accents.

And as far as Brosnan is concerned – there’s always the next generation. Pops proudly introduced Junior (who looks uncannily like his old Dad) as the next generation of Brosnan actors. Considering the history of Bond films, I am sure that Junior can have a shot at it in a decade or so. The media will have a field day announcing the son of Bond playing Bond…..and who knows, if that Paris chick is still around, he will have his own certified Bond vixen as well…..want to speculate on her character’s name?
Posted by Debra Daumier at 7:09 AM No comments: