Marrying up and cheating down 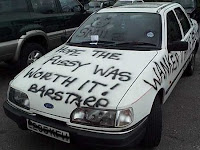 According to a Pew Foundation report, more women today are marrying men with less education and less income than they themselves have. The New York Times article on the Pew report reads like a trend piece, which is quite disappointing. The women's blog Jezebel also found the article same old-same old "the single, high earning professional female who can't find a man."

But ladies, be careful what you wish for – men who marry up have a tendency to cheat down. Just look at Tiger Woods, who married a Swedish model and cheated with a slew of quite unattractive women who you can not take home to meet Mom. The most outspoken one of the gaggle, Joslyn James aka Veronica Siwik-Daniels is an adult movie actress.

And then there is Jesse James who shares his name with a famous outlaw and his body with a weird chick. This bike builder married up when he got hitched with Sandra Bullock. His paramour is a heavily tattooed stripper, who happily announced that she conducted the affair out of boredom. Funny, most of us read, watch TV, rent a movie or phone a friend when we are bored (or write a blog!). But then, what can one expect from a person that poses in Nazi gear and has the initials WP (White Power) tattooed on the back of the legs. Well, it fits in nicely with JJ’s own pic as shown on the cover of Us Weekly. BTW, whoever dubbed that chick “bombshell” McGee needs glasses (and better taste in women)

The trend of cheating down is not limited to the US only. In Sweden, Princess Madeleine (not exactly an eyesore) was cheated on by her lawyer fiancé Jonas Bergstrom. His one-night stand was an average looking student who obviously needs to visit her dentist for some serious dental work.

To complete the circle, let’s look at David Boreanaz of “Angel” and “Bones” fame. He is married to Playboy model Jaime Bergman for almost nine years and the couple has two kids. His mistresses included Rachel Uchitel, who also bedded Tiger Woods. Ah, the mind boggles!

Personally, I don’t get it. If these guys want to cheat, go to Las Vegas. We all know that what happens in Las Vegas, stays in Las Vegas. The easiest and honorable way, of course, is to stay faithful.

But in all this mess, one person is laughing all the way to the bank - Gloria Allred, who represents several mistresses of Woods and Boreanaz. Mmm, I obviously chose the wrong specialty in law school……
Posted by Debra Daumier at 11:15 PM No comments:

J.D. Salinger published “Catcher in the Rye” in 1951. The coming-of-age novel was on the New York Times' best-seller list for more than seven months and has sold more than 35 million copies. Salinger, who died in January at 91, hadn't published since 1965.

Author Fredrik Colting penned under the name John David California the novel “60 Years Later: Coming Through the Rye”. It was published last year in England by Windupbird Publishing Ltd.

The plaintiffs in the case are Colleen Salinger, the author's widow, and Matthew Salinger, his son. Salinger claimed in the suit that there are "extensive similarities" between "Catcher" and "60 Years Later." Colting's novel features a 76-year-old character similar to Holden Caulfield, the fictional narrator of "Catcher," who meets the 90-year-old author who created him, according to court papers. He "never authorized any new narrative involving Holden or any work derivative of 'Catcher,'" according to court filings.

In appeal, a U.S. appeals court panel ordered federal judge Batts to revisit the legal basis for her decision. Sending the case back to her, the judges said the U.S. Supreme Court's decision in EBay Inc.'s patent-infringement case against MercExchange LLC was the standard to be used.

The court in the Ebay case ruled, that a plaintiff had to show the likelihood of irreparable harm to get an injunction, not just the probability of succeeding on the question of infringement.

"Although we conclude that the district court properly determined that Salinger has a likelihood of success on the merits, we vacate the district court's order," Judges Guido Calabresi, Jose Alberto Cabranes and Peter Hall said in a filing in the 2nd U.S. Circuit Court of Appeals in Manhattan. "EBay applies with equal force to preliminary injunctions that are issued for alleged copyright infringement," the court said.

Salinger’s lawyer, Marcia Beth Paul of Davis Wright Tremaine LLP, reacted by stating: “We are heartened that the appellate court agrees that Mr. Salinger's literary trust is likely to prevail on the merits of his claim and that this book infringes his copyright. The damage that will be caused by publication of this unauthorized sequel cannot be made whole by money.”

Edward Rosenthal of Frankfurt Kurnit Klein & Selz PC, representing Colting, said that he is confident that when the district court applies the legal standard required by the appeals court, the book will be permitted to be published.