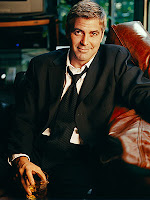 It’s no secret that George Clooney is a staunch supporter of President Barack Obama. To support the Prez with his reelection plans, he came up with a Clever Plan.

The President confirmed that he is having dinner plans at the Cloonster’s Hollywood mansion coming May 10. 150 of Hollywood’s elite will fork out $40,000 each to attend this event, dubbed: “Dinner with Barack.”
But now comes the clever part. There are two seats reserved for Obama supporters. For a sum starting at a mere $3, you can put in a bit to join the Golden Lads. (If you want to know more, you can find details on the Barack Obama website).

Basically, Clooney is crowdfunding with the goal to raise $6 million for his pal Obama.

Clooney has his own political agenda; he recently met with Obama to speak with him about a humanitarian crisis in the Sudan. Obama needs the funds; he burned through  $745 million during his 2008 campaign.

Is Clooney’s crowdfunding clever?  It will do Brand Clooney a world of good. I predict that many women will happily fork out $3+ for a dinner date with dreamboat Georgy.But he might overshadow his pal Obama and therefore not secure the votes the current President desperately needs. As for Brand Obama, being associated so strongly with Hollywood’s liberal elite might alienate voters that are struggling to survive in a harsh economy faced with crippling debts and soaring gas prices.

It will be interesting to see how much Clooney will be able to crowdfund.

Posted by Debra Daumier at 10:47 AM No comments: 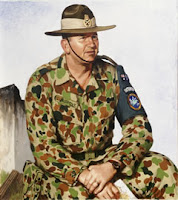 Major General Peter Cosgrove, an Australian, was interviewed on the radio recently (or so the story goes).

A female interviewer from ABC was asking him about his headquarters' sponsorship of a visit by a local Boy Scout Troop and threw him a spin on the old "have-you-stopped-beating-your-spouse" question.

Here's how he handled it:

INTERVIEWER: So, General Cosgrove, what things are you going to teach these young boys when they visit your base?

COSGROVE: I don't see why, they'll be properly supervised on the rifle range.

INTERVIEWER: Don't you admit that this is a terribly dangerous activity to be teaching children?

COSGROVE: I don't see how. We will be teaching them proper rifle discipline before they even touch a firearm.

INTERVIEWER: But you're equipping them to become violent killers.

COSGROVE: Well, Ma'am, you're equipped to be a prostitute, but you're not one, are you?

The station then went silent for 46 seconds. When it came back on the air, this interview was over.
Posted by Debra Daumier at 8:45 AM No comments:

No Pulitzer Prize For Fiction This Year 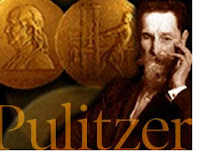 Pulitzer Prizes are awarded yearly in twenty-one different categories for achievements in newspaper and online journalism, literature and musical composition. Each winner receives a certificate and a US$10,000 cash award.

The Pulitzer Prize was established by Joseph Pulitzer, a Hungarian-American journalist and newspaper publisher. Upon his death in 1911, he left money to Columbia University in New York City, which administers the prize. The first Pulitzer Prize was granted in 1917, and continues today as one of the most coveted awards in the world.

The Pulitzer Prize for fiction is awarded for distinguished fiction by an American author, preferably dealing with American life. Traditionally, the judging committee picks the finalists and the 20-member board reads those books and decides the winner.

This year’s committee consisted of Chairperson Susan Larson, book critic Maureen Corrigan, and past Pulitzer Prize winner Michael Cunningham. The board was not able to pick a winner.

Prize administrator Sig Gissler confirmed that the board "failed to reach a majority" and thus did not award a fiction prize. "Whenever you do not give a prize, you have disappointment, so we understand that. We're sorry for the disappointment. The three books were carefully considered and the process was what it was."

Larson and her fellow judges stated that they were "shocked, angry, and very disappointed" by the Pulitzer board's decision.

The nominated finalists were:

"Train Dreams," by Denis Johnson (Farrar, Straus and Giroux)
It is a novella about a day laborer in the old American West, bearing witness to terrors and glories with compassionate, heartbreaking calm.

"Swamplandia!" by Karen Russell (Alfred A. Knopf)
It is an adventure tale about an eccentric family adrift in its failing alligator-wrestling theme park, told by a 13-year-old heroine wise beyond her years.

"The Pale King," by the late David Foster Wallace (Little, Brown and Company).
It is a posthumously completed novel, animated by grand ambition that explores boredom and bureaucracy in the American workplace.

Awards were however given in all other book-related categories, including repeats for National Book Award winner Stephen Greenblatt and NBCC winner John Lewis Gaddis.

In addition, the late Manning Marable was a finalist in the biography category, but the board decided to move him to history, which he won.

Ah well, better luck next year!
Posted by Debra Daumier at 6:06 AM No comments:

The Beautiful Art of Doggerel

Doggerel is an old and underestimated art form. According to the official definition, a doggerel is “a light verse which is humorous and comic by nature”. It is however often viewed with disdain as containing "little literary value".

In "Eating Your Aunty is Wrong", Stephen Arnott writes: "Groups of young men in Sussex and Devon used to go "apple howling", visiting local orchards and spouting *doggerel* to encourage the trees to be fruitful. In return the men expected drink or money from the orchard's owner. If they didn't get it they'd return to the orchard and shout curses at the trees."

According to the Encyclopedia Britannica, one of the earliest uses of the word "doggerel" is found in the 14th century in the works of Geoffrey Chaucer. He applied the term “rym doggerel” to his “Tale of Sir Thopas,” a burlesque of the long-winded medieval romance.

John Skelton, caught in the transition between Chaucer’s medieval language and the beginning of the English Renaissance, wrote verse long considered being almost doggerel. He defended himself in Colin Clout:

For though my rhyme be ragged,

It hath in it some pith.

Since then, doggerel has been employed in most English comic verse, from that of Victorian poet Samuel Butler and Gulliver's Travels author Jonathan Swift to the contemporary American poet Ogden Nash.

The doggerel even has a German counterpart, called Knüttelvers (literally “cudgel verse”). It was popular during the Renaissance and was later used for comic effect by such poets as J.W. von Goethe and Friedrich von Schiller.

All in all, the doggerel is a fun form of poetry and not so easy to write. So I invite all writers and poets, try your hand at the beautiful art of writing a doggerel!

Posted by Debra Daumier at 3:06 AM No comments:

Two enterprising journalists, Jim Giles and Bobbie Johnson, decided that it was time for an innovative online magazine - Matter. The format will long-form investigative narrative journalism about science and technology. “No cheap reviews, no snarky opinion pieces, no top ten lists,” they promise. “Just one unmissable story.”

Both journalists have an impressive resume: Jim Giles wrote for Nature and The Economist) and Bobbie Johnson for The Guardian and The New York Times. Not too shabby.

They decided to use Kickstarter to raise $ 50,000 in funds. They were more than successful – they raised over $140,000. “People gave way more than I thought they would,” said Jim Giles. “We have tapped into frustration with the way the internet has promoted quick and cheap journalism and bashed longer-quality stuff, or at least undermined the business model that used to support that sort of thing.”

Matter tweeted on April, 4: “We don't have a set launch date, but it will probably be in a couple of months”. Once Matter is alive, readers will have the option of buying individual stories for 99 cents each or opt for a subscription. The magazine will be monthly at first, and then weekly, assuming everything goes according to plan.

The 99 cents model is clever. Readers can purchase an article and read it on Kindle and iPad. Giles and Johnson leverage the ebooks hype. Some journalists and writers make money via Amazon and news sites such as atavist.net with stories that are too long to be published in a newspaper or magazine, and too short for a book.

Matter wants writers to approach them with vague ideas. The writer then gets matched to an editor very early on — before the piece is even formally commissioned — and the final article comes together as a collaboration between the writer, editor, and publishers.

However, Matter is quite narrow in what it wants to publish. It is focusing on long-form, narrative, investigative news stories about science and technology. To overcome this hurdle, the founders are looking at different models e.g., cooperating with newspapers.

Let’s wait and see if it lives up to its promise of “gripping exposes of online crime, untold tales of environmental threats, inside stories about revolutionary technologies and exclusive reports from the most controversial research labs.” Time will tell.......

Posted by Debra Daumier at 11:53 AM No comments: