Lucifer - Lost and Created in Translation 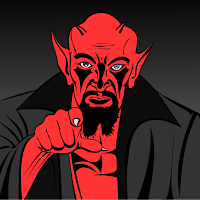 The devil might be in the details, but in case of Lucifer it’s in the translation. Lucifer is supposed to be mentioned in Isaiah 14:12, but good luck trying to find it in the original Hebrew text. As any translator (and historian) can tell you - it is impossible that the Latin word Lucifer found its way into a Hebrew manuscript, way before there even was Latin as a language.

The original Hebrew text refers to a fallen Babylonian king and not to any devil, fallen angel or any other celestial being. Au contraire, it tells the story of a king referred to as Helal, son of Shahar, which can best be translated as "Day star, son of the Dawn." It refers to his glittering robes and court, uncannily similar to the image (or brand as we call it today) of the French King Louis XIV aka “The Sun King"). Hence, the biblical text does not contain any reference to Lucifer, aka the fallen angel, aka Satan, aka the devil, aka the Prince of Darkness.

So how did Lucifer end up in Chapter 14 of the King James Bible which is the English translation of the Bible? Simple - the King James I translation did not translate the original Hebrew texts. It depended on St. Jerome (who lived in the fourth century of the CE) as a source. He mistranslated the Hebraic metaphor, "Day star, son of the Dawn," as "Lucifer," which became mainstream. Hence the Lucifer myth was created. The fictional Lucifer is an angel who became arrogant, challenged the Almighty, and thus was cast out of heaven to torture souls in hell.

The name Lucifer is derived from the Latin lucem ferre, bringer, or bearer, of light. (The Dutch still refer to matches as “lucifers”). In Roman mythology, Lucifer (in Greek Phospheros) is the ‘Bearer of Light’ and God of the Evening Star and Morning Star (Venus).


Needless to say, Lucifer became excellent fodder for theologians, fiction writers, poets, comics and even gave birth to a highly amusing FOX TV series. All in all, it shows that you can have fun with the devil aka Lucifer!
Posted by Debra Daumier at 3:59 AM No comments: