Remember when officials with the Treasury and the Federal Reserve touted the new dollar bills' sophisticated security features? They include a 3-D security strip and a color-shifting image of a bell, designed to foil counterfeiters. Amazing, non?
But lo and behold! At a time that the US government needs to responds to a economic downturn in a troublesome financial era, there has been a major hiccup. The new money is so high-tech that the presses can't handle the printing job.
Due to a problem with the presses, the federal government had to shut down production of the new $100 bills. It also had to quarantine more than 1 billion of those bills in a vault in Fort Worth, Texas. This amounts to $110 billion more or more than 10 percent of all existing U.S. cash (which is estimated at $930 billion).
"There is something drastically wrong here," one source told CNBC. "The frustration level is off the charts."
Up till now, more 1 billion unusable bills have been printed incorrectly. Some of the bills creased during production which created a blank space on the paper. Since correctly printed bills are mixed in with the flawed ones, it’s hard to sort the good from the bad. By hand, it would take between 20 to 30 years to weed out the faulty ones. Needless to say, the federal government is looking for a mechanized system to get the job done.
In case you wonder, the printing job itself cost around $120 million. It will (literally) go up in flames.
The moral of the story? It takes money to burn money....
Posted by Debra Daumier at 11:51 AM No comments: 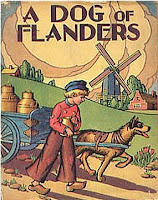 Mark McKee kept his favorite library book for 76 years. before he finally plucked up the courage to send it back to the library. He also sent a letter along with it, in which he wrote: “My conscience took over. I was entranced by the book and kept it with my prized possessions, intending to return it forthwith.”
Mr. McKee borrowed “A Dog of Flanders” written by English author Marie Louise de la Ramee, when he was 13 years old from the public library in Mount Clemens, MI. When he sent back the book, he was convinced that he owed the library thousands of dollars in fines.
But the library director, Donald Worrell Jr., not only waived the late fee, but also sent Mr. McKee a new copy of the book stating “we figure the story is better than the money”.
This is certainly true – the story went viral after being picked up by the local media, giving the library a nice PR boost.
In case you wonder what captivated young master McKee for so many years, read on.
The story of “A Dog of Flanders” takes place in 19th century Belgium. Orphan Nello went to live with his grandfather in a small village near the city of Antwerp. One day, the boy found a dog (Patrasche) that was almost beaten to death. The two became close friends. Nello helped his grandfather selling milk with Patrasche shackled to a dogcart to get the milk into town each morning. Nello fell in love with Aloise, the daughter of a well-off man in the village. Nello entered a junior drawing contest in Antwerp in order to win first prize (200 francs annually). He lost and then his grandfather passed away. After being accused of arson, Nello went to the cathedral of Antwerp to see Rubens' The Elevation of the Cross, but he could not pay the entrance fee. On the night of Christmas Eve, he and Patrasche found the cathedral open and went in. The next morning, the boy and his dog are found frozen to death in front of the triptych.
Posted by Debra Daumier at 8:44 AM No comments: