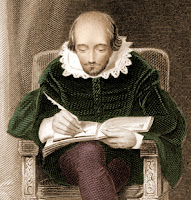 William Shakespeare (1564-1616) is famous for being one of the greatest playwrights of all times. But as it turns out, he was also a ruthless businessman.

According to the scientific research of Jayne Archer (a researcher in Renaissance literature at Aberystwyth University) and Richard Marggraf Turley (professor of Engagement with the Public Imagination at Aberystwyth University), Shakespeare was a cunning and quite unscrupulous business man. According to their research paper, by “combining both illegal and legal activities, Shakespeare was able to retire in 1613 as the largest property owner in his home town.”

The researchers go on to state that the Bard “stored grain, malt and barley for resale at inflated prices to neighbors and local tradesmen.” He obviously profited from the famines that swept through Europe at the time. He used his profits to purchase land.

Shakespeare also did anything he could to “avoid taxes, maximize profits at others' expense and exploit the vulnerable – while writing plays about their plight.” s one of the biggest landowners in Warwickshire, he was ideally placed to push prices up and then sell at the top of the market.

This puts Coriolanus in a whole new light! To refresh your memory, Shakespeare’s play Coriolanus evolves around a famine that is created and exploited by rich merchants and politicians to maximize the price of food. One of the famous and much quoted lines: “They ne'er cared for us yet: suffer us to famish, and their store-houses crammed with grain.” Oh, the irony!

The researchers found documents in court and tax archives that show that Shakespeare was repeatedly dragged into court for his illegal activities and tax evasion. He was fined for illegally stockpiling food and was threatened with jail for evading tax payments.

His legal troubles did not end there. In February 1598, he was prosecuted for holding 80 bushels of malt or corn during a time of shortage. He pursued those who could not pay him in full for these staples and used the profits to further his own money-lending activities.

In all fairness, Shakespeare could not rely on future income from his works. Copyright was only established in 1710, long after Shakespeare penned his plays and poems. Anyone could therefore copy and sell his work without his consent – and they did!

In case you want to know more, Jayne Archer will present more finding on May 23 at the Hay Festival of Literature and the Arts in Wales.


(Image courtesy of  bookhaven.stanford.edu)
Posted by Debra Daumier at 2:05 PM No comments: