My twelve days of Chrismas 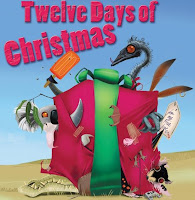 I didn’t have a choice; I had to break up with my boyfriend. OK, I know this will make my mother sad since he is a doctor and all that. But once you learn about his Christmas gifts to me, you will understand….

It all started on the first day of Christmas. I came home from work and found a pear tree in front of my door. Since I live in an apartment building on the top floor, my neighbors bitterly complained. So did the fire department for blocking the emergency exit. Hence the fine, which boyfriend didn’t pay of course – and that in these economic times, really! After auctioning off the arbor in question on eBay, I found the remains of a partridge in the corner. No wonder my fat cat was not hungry! Ah well, at least he is a happy cat.

After this disaster, b-f surprised me with two turtle doves. Well, anyone who knows me is mucho aware of the fact that I don’t have a romantic bone in my body. All that coo, coo went on my nerves, and the fat cat was happy to help out. At least I saved again on cat food (Royal Canin is expensive, you know!) so I killed two birds with one stone (literally).

Naively enough, I thought that would be the end of it, but no -on the third day I got three French hens. They resembled Sarkozy and were loudly arguing (in French) while flapping their wings. After they polished off a bottle of my favorite red wine, I decided that coq au vin would be a Good Thing to have for dinner. Lover boy seemed a bit miffed that I turned his gift into a gourmet meal. Ah bon, c’est la vie!

You would think that he would by now have realized that those livestock gifts are not exactly my cup of (Earl Grey, no milk) tea. Hence my surprise, when Mr. “I have an IQ of 160 and I am member of Mensa” showed up with four calling birds. They escaped from their cage and were chased bylover boy and my cat all around my living room. Neither was successful in catching them, so I opened the window and out they flew. That was a Very Good Thing indeed, since one of those PETA fanatics claimed that they are “protected”. Whatever – those bleeding hearts are more than welcome to them (cooked or fried, heh, heh).

The next day, I received five rings, which I naively thought were gold. I considered that adequate compensation for all that poultry mayhem, until I found out that the rings were not made out of gold (I had them appraised for insurance). Trust that cheapskate to give me gold plated junk – I bet my finger would have turned green wearing them. I gave them to “dentists without borders” to be turned into fillings.

My mood didn’t improve when I found six geese waiting for me next day after work. I don’t know if you ever had any dealings with geese, but they stink and are aggressive buggers. The cat freaked out and went into hiding – unfortunately for me in my clothes closet. I wonder if I ever get that pee smell out of my evening gowns. I wanted to kill the brutes, but they are Canadian geese and therefore protected. Animal Welfare took them away – I kept the eggs. Made a damn good omelet I must say!

The next day, mon amour took me out for dinner in the park, on the lakeside. So far so good, it was all tres romantique, until he gave me my next gift – seven swans. What the Hackensack is a city girl like me to do with those ducks on steroids, I ask you! In a stroke of genius, I donated them to the city – to grace the lake. The municipality was grateful, boyfriend upset. But at least the bird-gifts stopped – to be replaced by worse gifts!

Yes, the next present I had the honor to receive consisted of eight maids milking a cow. Turned out the cow was rather bad tempered (small wonder with 16 hands pulling her udder) and the maids were illegal immigrants from Mexico. At least B-F has to deal with the authorities and not little me. If he thinks I am going to post bail or visit him in the slammer – forget it! I am still burning cented candles to get rid of the manure smell.

The next gift turned out to be OK – nine ladies dancing. Since I love to dance, it was a great gift; and once I get the hang of this hip hop…..move over Beyonce!

My favorite was the next present I got – ten lords a-leaping. I am still blurry-eyed and have muscle-aches, but boy, was it worthwhile! I think I got a bit over enthusiastic – boyfriend was verrrrrry annoyed! That will teach him to be a couch potato! I never knew that guys could be so, well, athletic and flexible!

To make sure I would not exercise with those ten hunks again (I think he shipped them back to Australia) he bestowed eleven pipers. Since they were playing bagpipes in kilts, it brought back fond memories of the time I studied criminology in Edinburgh. Turns out that I still know how to have a highland fling.

The last gift was fine as well – twelve drummers. I am currently outsourcing them to the blue man group – to our mutual benefit, I might add. No need to grant b-f a kickback; he is enjoying Her Majesty’s hospitality as we speak and therefore enjoys free room & board.

So know you understand, why I am single again…..and don’t celebrate Christmas!
Posted by Debra Daumier at 5:49 AM No comments: