Why Kanye Hates Coinye Currency and Promply Killed It 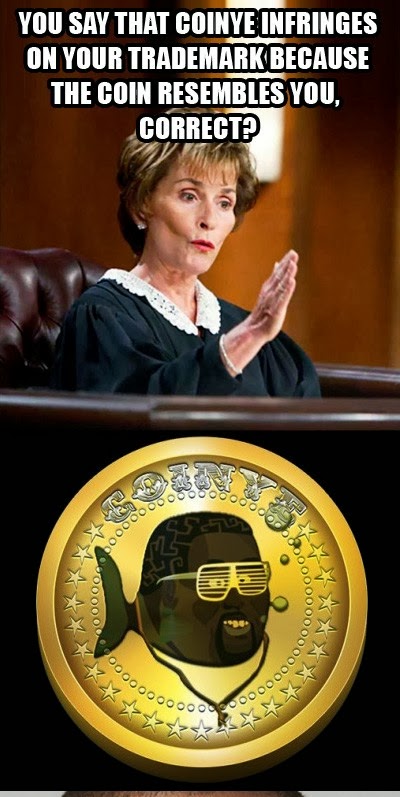 As you might now, the virtual currency Bitcoin is becoming more and more popular. Needless to say, its success triggered quite a few copycat cryptocurrencies trying to get a piece of the action. Virtual money talks!

A group of seven coders took a different direction – they decided to have some fun with the new hype. They created a virtual coin with the name “CoinYe West”, which they later shortened to “Coinye”. They even came up with a catchphrase: we ain’t minin’, we pickin’. The seven coders decided that the maximum number of Coinyes that could ever be mined in the currency would be 66,666,666,666. They also had fun with the design - it featured a cartoon fish wearing West's signature shutter shades.

Kanye West was not amused. The musician is not known for his sense of humor which might explain why his facial expression often resembles that of Grumpy Cat. He promptly instructed his lawyers to take action.

Since the entity of the powers behind Coinye was unknown, West’s legal team decided to also go after 0daycoins.com (a currency exchange) and Amazon.com as the provider of web hosting services to virtual currency exchanges. The legal eagles were hoping to flush out the John Does they wanted to sue.

Kanye’s law office Pryor Cashman LLP sent out a cease and desist letter of January 6, 2014 on behalf of Grumpy Kanye. In it, they state: “Mr. West is an internationally renowned musical artist, songwriter, producer, film director and fashion designer, to name just a few of Mr. West’s endeavors.” The Coinye currency would take advantage of/harm his brand. They go on to point out that the logo resembles their client and that the name of the currency was “substantially similar” to Kanye’s name. They demanded that all websites and social media accounts (Facebook and Twitter) associated with Coinyes would be shut down.

The developers quickly moved their website to India and issued the following statement:

“We are just a few guys who are excited about the future of cryptocurrency and would like to see it become a more mainstream phenomenon. We would like to make it clear that we are entirely independent of the Kanye, and there should be no confusion as to the intent or origin of this project. The name "Coinye" is intended solely as parody, not an indication or implication of endorsement or involvement.”

After considering their options, the creators of Coinye decided to back down and pulled the Coinye currency. They posted on their website "Coinye is dead. You win Kanye".

(Image courtesy of Coinye)
Posted by Debra Daumier at 4:35 AM No comments: 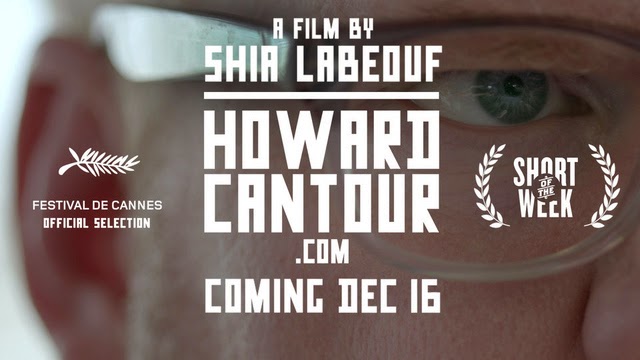 On December 17, 2014 Shia LaBeouf released his short film Howard Cantour.com. It did not take long for sharp eyes to detect the uncanny resemblance to a comic strip by famous creator Daniel Clowes.

LaBeouf took to Twitter to apologize for the mishap. Funny enough, even his mea culpa tweet seems to be plagiarized!


LaBeouf obviously does not know how to apologize. His tweet “[getting] lost in the creative process” doesn’t justify ripping off Daniel Clowes, especially considering the amount of time and work Clowes put into it.

LeBeouf also answered numerous questions about the origins of the short movie without pointing out that he adapted it from the comic strip,

Funny enough, even his apology about his plagiarism seems to be plagiarized! Andrew Hake noticed on Twitter that LaBeouf has already been caught once before in plagiarizing an apology. It seems that LaBeouf prefers trolling the Internet to find "his" apology instead of writing it himself.

According to Andrew S. Allen “We were led to believe by Shia and the filmmaking team that the story and script for HowardCantour.com was completely original,. There is a global outcry about the uncredited use of Daniel Clowes’ work. That didn’t come until it hit online. If it wasn’t for the legions of online Clowes fans, this may never have come to light.

As curators of a powerful but under-appreciated medium like short film where filmmakers spend years of work to make little or no money, the recognition you get from your work, and therefore attribution, is often all you have, so we take it seriously. Until Clowes grants permission and is credited in the work, we’ve pulled the film offline.”

Meanwhile on Twitter, users came together with the tongue-in-cheek hashtag #shialaboeuffilms to offer some suggestions for future projects LaBoeuf could create that would also be “inspired by someone else’s idea”:

Shia LaBeouf tried to close the unpleasant incident by stating that his behavior, tweets, plagiarism and public apologies were all part of his "performance art" for a project called #stopcreating. Guess what? He got the idea from Joaquin Phoenix.

Curious minds want to know - was that LaBoeuf's final act of plagiarism?
Posted by Debra Daumier at 8:25 AM No comments:

The Tale of the Two Wine Label Tulips 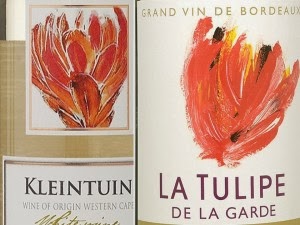 HEMA is a leading Dutch discount retailer selling household goods. As part of its range, it sells the South African Kleintuin wine. The label features a red tulip.

Slight problem - the label closely resembles those on the bottles of artisan winemaker and TV show host Ilja Gort.

His tulip brands his La Tulipe wine since 1997. It was painted by his then 6-year-old son.

Mr. Gort was upset when he saw HEMA's wine abel and claimed that the discount retailer was trying to cash in on his success.

His lawyer sent a cease-and-desist letter; originally without success. When Mr. Gort threatened to take HEMA to court, the retailer finally responded. HEMA announced that it would pull all bottles with the disputed label.

The retailer also emphasized that it “never intended to copy the wines of Mr. Gort” and that it would redesign the labels “to avoid any confusion in the future.”

Mr. Gort would have won the court case. His La Tulipe wine has been winning international awards for years. Any confusion with the HEMA’s table wine would harm the exclusive La Tulipe brand.

Gort also uses another drawing of his then 8-year-old son. The kid's painted rose features on the label of the Tulipe de la Garde wines. In 2000, Dutch painter Jan Cremer sued Gort claiming that he was the original artist of that rose design and never got royalties. The case was dismissed by the District Court of Utrecht.

(Image courtesy of www.wijngekken.nl)
Posted by Debra Daumier at 7:06 AM No comments:

Why the Real Snow White Was Murdered in Brussels 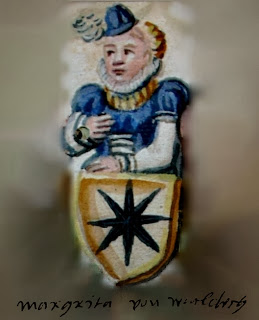 Many fairytales are based on real persons and events. Jacob and Wilhelm Grimm made it their mission to preserve Germanic folktales.

One of the most popular tales is for sureSnow White. But few people now that the story is based on a cause célèbre that took place in royal circles. It involves star-crossed lovers, child labor and death by poison.

The tantalizing tale starts with the beautiful Margaret, daughter of Count Philipp IV of Waldeck-Wildungen and Margareta of Eastern Friesland. Margareta was Philipp’s sixth child. Her mother died when she was four. Her father remarried. His second wife Catherine of Hatzfeld was a strict stepmother. She died childless a few years before Margaret herself passed away.

Margaret grew up in Freidrichstein Castle near the German town of Waldeck. Life for many was far from a fairytale exisance.

For one, the area was known for its mining activities. The Waldeck family ownedgold, silver, copper, lead and iron mines. In the local copper mines, much of the work was done by small children. The brutal working conditions and malnutrition stunned their growth. They were referred to as “dwarfs”.

Furthermore, Margaret’s hometown was the hunting ground of a grisly murderer. A local man suspected some children of stealing from him, decided to take matters in his own hands by giving the little suspects poisoned apples.

By the time Margaret turned 16, her relationship with her stepmother had turned so bad, that her father decided to send her abroad. She went to live at the court of Brussels under the protection of Mary of Hungary. Needless to say, her father also sent her there to marry well.

The young beauty got the eye of two prominent suitors: the Spanish Crown Prince Philipp and the Dutch Count of Egmont. Both suitors showered her with gifts and attention. Margaret and Philipp became lovers and he contemplated marrying her. That created a major problem for Philipp’s father; Margaret was not eligible enough. Marriages at that time were alliances between families, not love matches. Margaret could not offer the future King of Spain Philipp II any interesting political ties or benefits.

Soon after, Margaret’s health started slowly to deteriorate as she mentioned in letters to her father. She also wrote her last will and testament in shaky handwriting resulting from tremors due to poisoning. When she passed away at the tender age of 21, rumor circulated that she had been poisoned by or someone who hated her or by the Spanish court to prevent Philipp from marrying her.

Her life might have been short, but her legend will live on for many more centuries to come!

(Image courtesy of the Royal Library in Bad Arolsen, Reference: Genealogica iconica seu picturata comitum in Waldeck, antehac in archivo asservata ca.1580)
Posted by Debra Daumier at 5:31 AM No comments: