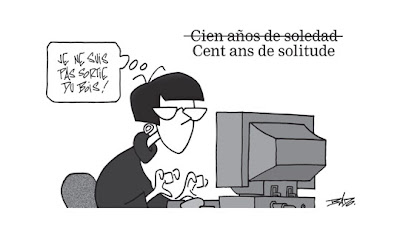 Idioms are figures of speech that are not be used (when literally translated) in other languages. For example, the notion of “knock it out of the ball park” makes sense in the US, but is not understood in other countries. The noun “serendipity” is also mainly used in the US, and will not be understood by non-Americans.

But information is also transferred in non-verbal communication. In some cultures, people nod to signify “yes” and shake their heads to signify “no;” in other cultures (e.g., Greece, India) this practice is different.

If we look ad neologisms, there is a language issue there as well. Neologisms are terms that have come into language relatively recently as technology or society involved. Computer technology gave birth to the term “spam” and “add-on”. But different countries use different words. A computer is called a “Rechner” in German-speaking countries. A cell phone is called a “mobiel” in Dutch and a “Handy” in German.

Slang exists within almost all languages known to man. Slang does not only vary per region, but also per social group. There are often significant generation gaps in the use of slang (e.g., groovy).

Language is alive and always evolving. It’s one of the most creative tools to express feelings or convey an idea. Every day, new expressions and concepts are being coined (e.g., 9-9-9 tax plan).

Want to know about writing? Contact me at Tip Top Writer.

Posted by Debra Daumier at 8:18 AM No comments:

Amanda Knox, Casey Anthony, who’s next to join the club?

In an astounding reversal of fortune, Amanda Knox was set free by an Italian jury. She told the jury impassioned: "I did not kill, I did not rape, I was not there." Throughout her trial, she has always maintained her innocence. So now, after four years, she walked out of her Italian prison a free woman.

Was she the victim of a miscarriage of justice? Or is she a second Lindy Chamberlain (“a dingo took my baby”) or Casey Anthony?

One of the main problems is the girl herself (similar to Ms. Anthony). She was quite appropriate referred to as “[the killer] with the stone-cold eyes”. She never even flinched once during her court appearances or showed any grief for the brutal murder of her close friend and housemate Meredith Kercher.

Poor Meredith was forced to kneel, her face was pushed into the floor, and she was then raped at knife-point before being stabbed and strangled to death.

Amanda seems to be obsessed though with former boyfriend Raffaele Sollecito. To this day, Raffaele denies that she was at his house on the night of the murder (as she claimed).

Ms. Knox also repeatedly changed her story and even accused an innocent man to save her own skin.

So why was she set free? Simple - the evidence was too botched and the forensics too flawed. Does that make her innocent? Far from it! But in any democratic legal system - in dubio pro reo.

The act she put up during her last hearing was an example of great acting. She pleaded: ‘I don’t want to be deprived of my life.’ Yeah, sure, but what about poor Meredith? She for sure was cruelly deprived of her life!

Nicknamed Foxy Knoxy by the media, she will for sure hammer out a great book deal, followed by a Hollywood blockbuster. Ah well, she can always hook up with Casey Anthony and start her own “exclusive” club of accused murderesses set free....

In the mean time, there is no justice served and the parents and relatives of Meredith have to try to come to terms with this latest Italian carriage of justice.....

The public prosecutor announced that they will appeal the latest verdict. Stay tuned....

Posted by Debra Daumier at 9:45 AM No comments: