About An Ax-Murderess in the 17th Century, Rembrandt and a Determined Archivist in the 1960s 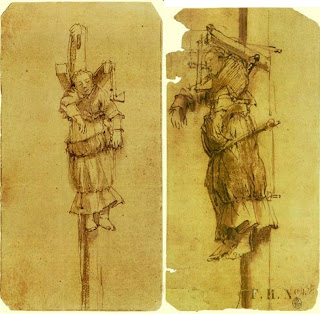 It all started when Baruch, a good friend and avid reader, told me that he just finished reading “The History of Amsterdam”. Since he knows that as lawyer and writer I love a good murder mystery or cause célèbre, he told me about a famous murder that took place in the 17th century and was eternalized by Rembrandt in two drawings. Fascinated, I started to research and found a compelling story that spans several centuries and involves three women and one painter.

The story starts as follows.

Around April 14th, 1664 Danish Elsje Christiaens came to Amsterdam at the age of 18. She was born in “Sprouwen”, which is quite likely Dutch for the island of Sprogo.

She wanted to work as a maid (or servant girl) and rented a place to sleep in the cellar of a boarding house. At the end of the first month, the manageress of the establishment came to collect the rent of one “daalder” (€ 0,68 or US$ 0.89). However, Elsje was not able to pay, since she had not been able to find any work yet.

The next day, the manageress asked again. At that point, the women started to argue. The manageress threatened to confiscate her chest containing her (meager) belongings. Their fight became physical when the manageress hit Elsje with a broomstick. Elsje then grabbed an ax that was near the cellar and hit the manageress on the head. The woman fell down the cellar stairs and died.

Elsje panicked, ran outside and jumped in the Damrak (at that time the mouth of the Amstel River). She was dragged out of the water and arrested. After two interrogations, she was convicted on May 1, 1664. The execution was considered to be fitting the crime: she was hanged in front of the town hall and the executioner hit her several times with the murder weapon on her head.

The body was then transported to Volewijck (at that time moor land that contained a gallows field). Her body was tied to the gallows with the ax hanging next to her head “in order for air and birds to devour her”. When Rembrandt learned about the faith of Elsje Christiaens, he rowed over to Volewijck where he made two drawings of the executed girl.

Centuries later, in the 1960s, archivist Ms. I.H. van Eeghen became fascinated by the two drawings. Although art historians dated the drawings around 1655, she realized that none of the Rembrandt experts had ever bothered doing any research in law archives to find out more about the subject of the drawings.
She started to go through 25 years of recorded confessions and found out that the only woman ever to get the death penalty at that time was a Danish maid called Elsje Christiaens.

Based on her findings, she was able to accurately date the drawings at the beginning of May 1664. She was pleased as Punch that the lauded Rembrandt experts erred 8-10 years with their dating, stating: “Elsje Christiaens, who once served as an example to deter others from committing crimes, is now once again serving as an example for art historians to be careful with their dating solely based on style criteria!’

I find it amazing how a young immigrant that was executed two weeks after entering a country in search of employment is talked about and blogged about almost 450 years later......Furthermore, this story involves three women: the murderess, the victim and the archivist.

I wonder....would Rembrandt have been amused?


Let me dedicate this blog post to another amazing woman who encouraged me to write this post: Gita Sterenson.

Posted by Debra Daumier at 4:07 AM

pretty accurate i think , but moste sources say she was strangled at the Garrote , not hanged.. at the volenwijk where rembrandt made those 2 drawing , some other sketch was made by Anthonie van Borssom ,the person standing in front of the pole lookig like he might be drawing could be rembrandt :) -> link

Debra, thank you very much for the story. I've been browsing for the info on this Rembrandt's painting. Your post gives exhaustive information. Thanks again.