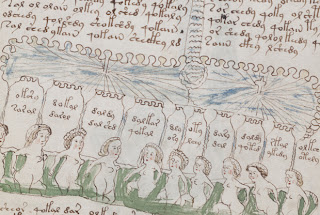 In September 2012, I wrote about the Voynich mystery. The Voynich Manuscript is a detailed 240-page book written in a language or script that is completely unknown. It is named after the Polish-American antiquarian bookseller Wilfrid M. Voynich. He acquired it in 1912.

The pages are filled with colorful drawings of strange diagrams, odd events and plants that do not seem to match any known species. The appeal of the manuscript is impossibility to decipher it.

Many scientists are still trying to crack the Voynich code. One of them is Jorge Stolfi, a professor of computer science at the State University of Campinas, Brazil. He was able to compose a grammar for Voynichese and concluded that it behaves like a natural language, more so than like a code, as many others believe.

According to Stolfi, Voynichese points to an Asian language like Chinese with its short words with tonal structures. He theorizes that someone went to the Far East and phonetically transcribed something he heard or read. He explains: “It is not unusual at that time to make up an alphabet to record a foreign language.”
But Andreas Schinner, a theoretical physicist, argues that the non-randomness of syllable distribution is a strong indication that it is a hoax, not a natural language. He concluded that the ‘language’ is very different from human writings, even from ‘exotic’ languages like Chinese. In fact, the results better fit to a ‘stochastic process’ (a sequence of correlated random events).” In an article in Cryptologia, he concluded that the Voynich Manuscript does not contain any encrypted messages.

Psychologist Gordon Rugg agrees that it is a hoax. This creates a new mystery – why would anyone create such a manuscript? Creating a hoax for profit?

The main suspect for penning a hoax manuscript is EdwardKelley who had a track record of creating made-up languages and perpetrating frauds and hoaxes. As a convicted villain, he had his ears cropped for forgery.

However, the Voynich Manusript shares many similarities with Francis Bacon’s New Atlantis, a 17th-century utopian tract about a fantasy island. In it, Bacon’s ideal college is described, including the  unknown plants, the grafting, the code, books on velum, and new types of animals, as well as a bath full of naked ladies.

For now, the Manuscript keeps its secrets, although many experts believe that the key to the Voynich manuscript is just around the corner. Let’s wait and see...I will keep you posted!
Posted by Debra Daumier at 1:01 PM