Beware of "Chef" (especially if you are a clam) 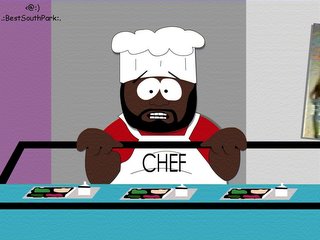 You might not be a fan of the cartoon "South Park", but you must love the latest hoopla surrounding one of the characters.
"South Park" , known for making fun of everybody and everything (including religion), received notification that Isaac Hayes (who was well paid to lend his voice to the character "Chef"), resigned.
For those of you who are not familiar with this character, James "Chef" McElroy is a lusty school cafeteria cook who dishes out advice (as well as food) to the school children.
In one episode, the show made fun of Scientology, Mr. Hayes' religion
Mind you, Hayes never protested the mocking of Christianity, Catholicism, Judaism, Mormonism, Buddhism and Islam on the show.
It’s just the Cruise Cult (oops, I mean Hubbard’s cult) that cannot be satirized. Tssssssss.

In a reaction, the creators of the show, Matt Stone and Trey Parker, pointed out that they "never heard a peep out of Isaac in any way until we did Scientology. He wants a different standard for religions other than his own."
Well, that’s religion for you.
By nature, all religions lack a sense of humor.
There might be happy reborn Christians (one even become President), but dealing with all those mortals sins and religious obligations is just no fun. (Unless you are the Pope and infallible).
And converting sinners is no laughing matter either – it involves a lot of sorrow, soul searching and revelations.
Obviously, Hayes and his 100,000 fellow space clam worshippers are on a higher level than the billions of Christian, Jews, Buddhists, Hindus and Muslims.
Funny, considering that those clam aliens reside on the bottom of our oceans.
May be they were kicked out of heaven?
Jumping up and down too many clouds and dishing out unsolicited advise?
Gives tempting the patience of a saint a whole new meaning….

But our Mr. Hayes made one big mistake - never mess around with comedians.
You see, they can get even without liability.
According to the network, the tenth season of "South Park" will start with a new episode titled "The Return of Chef!".
It marks the "triumphant homecoming" of our favorite "Chef" to the show, the network said in a statement.
So Mr. Hayes did not harm the show at all, but even gave it a lot of free publicity.
It also confirms what the public opinion: Scientology is a Religion for Dummies.
I don’t know what "The Return of the Chef!" episode entails, but if I were a writer on the show, I would commemorate the Chef’s triumphant return with a surprise visit of Oprah to the school cafeteria.
Our Chef is so taken with this, that he jumps up and down chairs, grabs Oprah repeatedly while yelling, "I am so happy!"
Feeding the hungry kids clam chowder in the mean time.
Makes sense to you?
Posted by Debra Daumier at 6:05 AM