In The Mood for a Topnotch Wine? Bid on the “Oldest Wine in the World” Dating Back To 1774 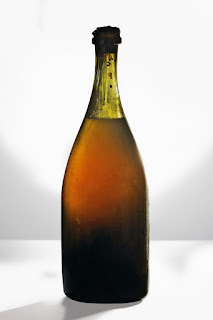 If you enjoy vintage wines and have money to burn, you might want to head to Paris. Three of the oldest bottles of wine known to man are being put up for auction. The three bottles contain a so-called “vin jaune” (yellow wine) that originated in the Jura in the east of France. Wine from this region is known as the “wine for kings and the king of wines”.  The bottles are expected to fetch thousands of Euro, so bring your checkbook! To put it in perspective: In 2011 and 2012, two bottles from the same stock were sold for Euro 57,000 and 38,000 respectively.

These 1774 bottles are estimated at Euro 20,000 each, but are expected to fetch at least double that amount. The bottles have a content of 87 cl and were in the possession of the descendants of Pierre Vercel, a renowned vintner from the 17th century. The three bottles are the last ones of its kind that the family possesses.

If you wonder about the quality, no worries there. Back in 1994 a bottle of the same ‘batch’ was opened, tasted and rated by a group of scientist, wine experts and viticulturists. The wine was rated as being “excellent”. The wine was described as having a “gold and amber color with accents of nuts, herbs, curry, cinnamon, vanilla and dried fruit.” It scored 9.4 out of 10.

Fun fact: Louis Pasteur owed his admission in 1881 to the prestigious Académie Française to a bottle of 1774 vin jaune.  According to legend, Pasteur a friend of Vercel’s grandchildren.

Apart from the three 1774 wine bottles, another 99 bottles (no joke!) from the cellars of Vercel’s descendants are up for auction. The auction will take place on May 26 in Lons-le-Saunier, a city in the east of France.

Posted by Debra Daumier at 6:34 AM