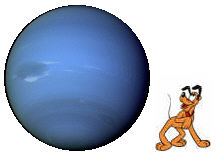 I love SF, which is a Good Thing, since I work in high tech (the science part) and my salary is fiction.
But even for Trekkies, the downgrading of Pluto is weird, really weird.
Poor Pluto was discovered in 1930 by 24-year-old American astronomer at Lowell Observatory in Arizona, Clyde Tombaugh.
The Naming Game soon started.
It was 11-year-old Venetia Burney, from Oxford, England, who suggested the name.
It was chosen from a long list that included Atlas, Apollo, Zeus, Minerva and even Bacchus. Needless to say, reporters of the New York Times pitched Bacchus, the Roman god of wine and intoxication.
I blame the International Astronomical Union, which had nothing better to do than shaking up our solar system.
They redefined “planet” as:
"a celestial body that is in orbit around the sun, has sufficient mass for its self-gravity to overcome rigid body forces so that it assumes a nearly round shape, and has cleared the neighborhood around its orbit".
It seems that poor Pluto wobbles a bit and was therefore stripped of its planet status and demoted to a wannebee or “dwarf” planet.
I haven’t got a clue what that means – can Pluto grow up and become a proper planet?
I am also not sure what will happen to Pluto’s moon Charon. Will it become Ice Cube?
So our Pluto is out of the cosmic planet club, and globetrotting Luciano Pavarotti is in.
Good thing his family name starts with a P as well – makes us all less p-d off.

After 76 years, Pluto stepped down as a planet. Let’s hope that British Bess gets the hint and does the same for her son Charles.

Needless to say, people (I am referring to us Terrans, since I have no clue how the Martians are taking it. If the movie “Mars Attacks!” is anything to go by, not kindly, methinks) are not happy.

But the stripping of Pluto of its planet status launched a merchandise wave that would do credit to any presidential campaign.
Scores of Web-savvy entrepreneurs went on the Internet, selling Pluto memorabilia from T-shirts and mugs to bumper stickers and mouse pads.
Within 24 hours of the “bad” news, a wave of Pluto items appeared on Cafepress.com, (a San Francisco-area Internet company that prints T-shirts and other merchandise), including 200 designs on more than 1,500 products.
Many items and slogans related to Pluto's demotion and advocated its return with T-shirts proclaiming "Save Pluto" and "Stop Planetary Discrimination."

What the eggheads of the IAU didn’t understand, is that we ordinary people were quite happy with the nine planets we knew.
Let’s face it – does the downgrade bring us any benefits? Tax cuts, world peace, cure for AIDS? I don’t think so!
Au contraire, we now have to memorize one planet less and a few candidate planets more (including one called Xena, that unfortunately doesn’t have anything to do with the Warrior Princess).

To quote Dr. Hiroshi Kyosuke of the University of Tokyo:
"It seems counterintuitive to me that we should say Pluto is no longer a planet, yet Donald Rumsfeld is still Secretary of Defense. After all, Pluto has done no harm."

Hear, hear!
Pluto the dog, who made his debut in 1930, couldn’t agree more.
According to Disney insiders, he worries about the fate of this namesake and all the textbooks that must be rewritten.

Personally, I think that we can do a better job of classifying and naming planets than those spaced-out cosmos cowboys.

Mercury – Mini-me, since it’s small and fairly close to Earth.

Earth – Ego, since that’s what we have, in abundance.

Mars – Mars, since too many Mars movies have been made and we don’t want to upset our green neighbors, so we?

Jupiter – Juniper, since this berry gave us far more pleasure in the form of gin than this huge planet ever did.

Saturnus – Ringtone, if you wonder why, just have a look at its shape – Nokia can be a sponsor (“connecting aliens”)

Uranus – U2, for the mispronunciation by English speaking pubertal adolescents alone.
Great sponsoring opportunity for Bono as well.

Neptune – Loonytune, since only a loony could have named a gas ball after the god of oceans and seas.

Pluto – Exepluto, since it’s exit for the poor thing and it sounds like a really cool computer program (that is, as long as it’s not a Microsoft product).

For know, Pluto did one thing, that many of its fellow planets were not able to do – to get more coverage than the Klingon planets!
Posted by Debra Daumier at 3:12 AM